At least 30 people suffered injuries from an explosion at a Carnival celebration in the Parisian suburb of Villepinte, France, on April 1. The explosion took place during the lighting of a bonfire, and was determined to be an accident rather than a criminal or terrorist act.

The video above shows two people carrying a long, lighted torch and using it to light a fuse leading to a plywood structure. However, the pile exploded rather than catch on fire.

BNO News reports that the explosion happened shortly after five in the afternoon, local time. Most of the reported injuries were minor to moderate, but at least four people suffered serious injuries. One of the injured was Villepinte’s mayor, Martine Valleton, who was hit in the right leg by a piece of debris.

The video clip below starts after the explosion, and mainly shows police moving crowds away from the burning pile of bonfire debris.

Local fire services said the accidental explosion happened due to mishandling of the fuel used to light the bonfire. 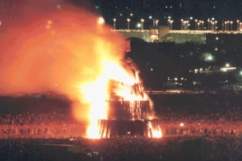 Loading more stories
wpDiscuz
2
0
Would love your thoughts, please comment.x
()
x
| Reply
At least 30 people were injured by an explosion at a Carnival celebration in Villepinte, France. The explosion was an accident, most likely caused by mishandling of the fuel used to light a bonfire.