Many areas in the southern U.S. were affected by severe thunderstorms on Wednesday.

The storm brought some tornadoes in parts of Georgia and also in South Carolina.

In Columbia, South Carolina, a tornado warning was issued and people in its path were warned to take cover for their safety. No injuries have been reported yet as a result of the storms.

Winds blowing near 70 mph were reported across multiple states, causing massive power outages, destruction of buildings and flash floods. The Associated Press reported that a strong storm destroyed a silo and “hundreds of trees” west of Columbia.

Here’s some photos and videos of the storm damage and the flooding:

Sectors of Columbia are already beginning to flood. View: intersection of blossom and huger. pic.twitter.com/W31GlvX706

A House Caught Fire on Lake Wateree In Camden

Water Levels Continue to Rise & Streets Have Been Shut Down 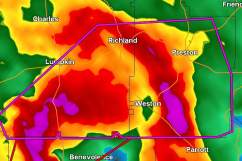