Ted Nugent, Kid Rock, and Sarah Palin visited the White House on Wednesday, and they made sure to take plenty of pictures.

The trio, each of whom are avid Trump supporters, posted photos of the visit on their social media. Palin released a series of images with the caption “A great night at the White House. Thank you to President Trump for the invite!”, while Nugent posted a photo of he and Trump shaking hands on his Facebook page, with the caption: “So today is the 242nd anniversary of The Shot Heard Round The World is it! Well well well looky looky here boogie chillin’, I got your Shot Heard Round The World right here in big ol greazyass Washington DC where your 1 & only MotorCity Madman WhackMaster StrapAssasin1 dined with President Donald J Trump at the WhiteHouse to make America great Again!” Check out both posts below.

While the majority of the visit continued in this positive light, there was a photo uploaded to Palin’s Facebook that had a different connotation to it. The photo shows Palin, Nugent, and Rock standing in front of a portrait of Hillary Clinton, and the trio look as though they aren’t worried about hiding their mockery. As you can see below, Nugent is making an “outta here” gesture with his thumb, while Rock stands with his arms crossed. As for Palin, she puts forth a look that only be described as “unflattering.”

Are they poking fun at the former Presidential candidate? It certainly wouldn’t be of character for the trio. In a 2014 Facebook post, Nugent voiced his disdain for Clinton, writing “Hillary Clinton is clearly the enemy of freedom and the enemy of America… This rotten woman has got to be exposed for the enemy she is and sent packing.” 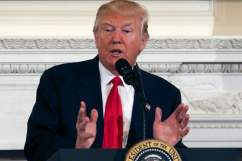 Was The New York Times ‘Caught in a Big Lie’ With Report on Patriots White House Visit?

Loading more stories
wpDiscuz
7
0
Would love your thoughts, please comment.x
()
x
| Reply
The celebrity trio visited the White House on Wednesday, and they may have thrown some shade while doing so.