The father of teenager Elizabeth Thomas – who was found after a month on the run with her 50-year-old former teacher, Tad Cummins – says he thinks the 15-year-old was brainwashed.

“We want her to know we love her,” Thomas’ father, Anthony Thomas, said on Good Morning America, the morning after authorities said they’d found Elizabeth in a northern California cabin with Cummins, who was then arrested.

“She’s been with Cummins for a little over a month now and after that sort of thing, after that sort of ordeal she was through, it’s going to take some working with her for awhile,” the father said. You can watch the video interview above.

“Do you think she was brainwashed?” host George Stephanopoulos asked Thomas, who was flanked by some of Thomas’ siblings.

He said the family had not yet spoken with Elizabeth as of the morning of April 21, but that she was expected to be flown back to Tennessee later in the day. He said there will be therapy involved. “Because we love her so much, we’re going to be patient with her. We’ve got to get her the help she needs,” said the father. One of her siblings described her as a “social butterfly” who was happy with life before she went missing.

However, Elizabeth also had a troubled home life.

According to WSMV, Thomas was home schooled until her freshman year of high school. The television station quoted the local district attorney as saying her home life was troubled.

Tad Cummins and Elizabeth Thomas at an Oklahoma Wal-Mart. (TBI)

WSMV reported that Elizabeth told investigators her mother “banged her head into the agitator of the washing machine” and “threw her down the basement stairs and locked her down there.” Kimberly Thomas “is also accused of making the children get naked in front of several other people,” the television station reported, adding that “Elizabeth is one of 10 children in a single-parent home because her father now has full custody of all of them.”

The man who tipped off authorities that Cummins and Thomas were in California, Griffin Barry, also gave a television interview in which he said, “The girl really wasn’t looking at me or anything and he was kind of dominating the conversation,” reports the Tennessean, which adds that Cummins claimed the pair was named John and Joanna and that his belongings were lost in a fire. The two had previously been staying at a commune, the Tennessean says Griffin claimed.

Authorities revealed on April 20 that Thomas, 15, “has been safely recovered in Northern California,” reported the Tennessee Bureau of Investigation. “Tad Cummins is under arrest,” TBI added. In a press release, authorities said Cummins and Thomas were located in a Cecilville, California cabin not far from the Oregon/California border.

Authorities said Thomas was healthy and unharmed, but their main concern is how she is “emotionally and mentally.” If she needs help, authorities said, they want to offer it to her. “At the end of the day, she’s 15-years-old. She’s a young girl with a grown man,” authorities said in a news conference, adding of Cummins’ capture: “You can’t hide from that many millions of people.”

The capture of Cummins and recovery of Thomas ends the more than month-long saga of the Tennessee health teacher and his student, who vanished in the midst of an investigation into a complaint that he was spotted kissing her in a classroom. Since that time, authorities had launched a massive manhunt for the pair, who both filled their Instagram pages with love posts before vanishing.

Cummins, a father and grandfather whose wife, Jill, is now divorcing him, has been fired. Thomas was a student at the school where he taught. The teacher and student had eluded authorities for more than a month, with the last sighting of them coming in an Oklahoma City Walmart in mid-March.

Before disappearing together, both the teacher and student wrote constantly about love and soulmates on their respective Instagram pages. Authorities have released almost no information about Cummins’ arrest, and it’s not clear whether Thomas will say she went willingly.

Cummins and Thomas were only in the area about a week, CNN reported, adding that the caretaker tipped police off and helped lure Cummins out of the cabin on his own under the ruse of building a rock wall.

You can watch the Tennessee Bureau of Investigation news conference on the capture above.

“She will soon be back home,” authorities said in the news conference of Thomas. They said they had received a tip from the public that led to Cummins’ capture, and that they expect criminal charges will keep him behind bars for quite some time. “It only takes one tip,” TBI officials said. They said the pair was found in a “remote area” and that Thomas will be flying back home on a Tennessee Bureau of Investigation aircraft soon.

Prosecutors said the state has an aggravated kidnapping and sexual contact with a minor charge available to it. Authorities said they want to reacquaint Thomas with her family and friends.

Thomas’ Instagram profile calls her a “wife” and contains numerous recent graphics about love and soulmates, but some of her posts were disturbing.

Thomas also wrote about being broken, ugly, and wanting to die. One of her last posts was about Beauty and the Beast and contained the saying, “every beauty needs her beast to protect her from everything but him.”

Cummins allegedly researched teen marriage before vanishing with Thomas, a teen who had been an alleged victim of family abuse and was home schooled until this year. 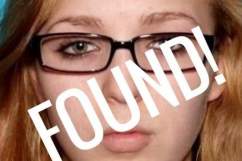