A 75-year-old Florida woman was brutally attacked and choked with a metal leash on Thursday while she was walking her dog, according to Pinellas County Sheriff’s Department officers.

Emanual Qosaj, 20, has been arrested and charged with felony attempted murder, battery, and two counts of battery on an emergency medical care provider.

His two brothers have also been charged in connection with the attack in Palm Harbor, which police said appeared to be random.

A witness apparently called police on Thursday to report the attack, which occurred at 754 1st Court, and when deputies arrived, they heard screaming, according to a statement from the sheriff’s office. They say that Emanuel Qosaj was on top of the woman “battering and choking her with a metal dog leash.”

The photo below allegedly shows Qosaj on top of the woman.

BREAKING: Photo of man arrested 4 attempted murder. Attacked 75YO walking dog. This is him biting & beating her. Witness saved her life. pic.twitter.com/WmxNZoJTDI

Deputies said both Qosaj and the woman were walking their dogs when the incident occurred. Witnesses tried to stop the attack but were pushed away by Qosaj.

Eventually deputies used a Taser on Qosaj in order to gain control of him so they could put handcuffs on him.

The woman was taken to Mease-Countryside Hospital for serious, but non-life threatening, injuries, according to police.

Meanwhile, Qosaj was taken to the same hospital to be “medically cleared.” Deputies said he spat on emergency personnel while they were taking him to the hospital.

Deputies also say that Qosaj’s brothers, Alfred Kole Qosaj and Genc Kole Qosaj, both “interfered” with the investigation. Genc Qosaj allegedly struggled with a police officer, injuring the officer’s hand. He was arrested and charged with battery on a law enforcement officer and resisting arrest with violence. Alfred Qosaj was arrested and charged with resisting an officer without violence. 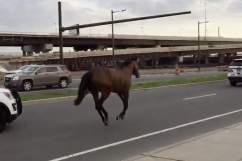 Read More
Breaking News, Florida
Follow Heavy ↓
wpDiscuz
10
0
Would love your thoughts, please comment.x
()
x
| Reply
Emanual Qosaj, 20, has been charged in an attack on an elderly woman while both were walking their dogs in Palm Harbor. He allegedly choked her with a leash. His brothers were also charged in the incident.