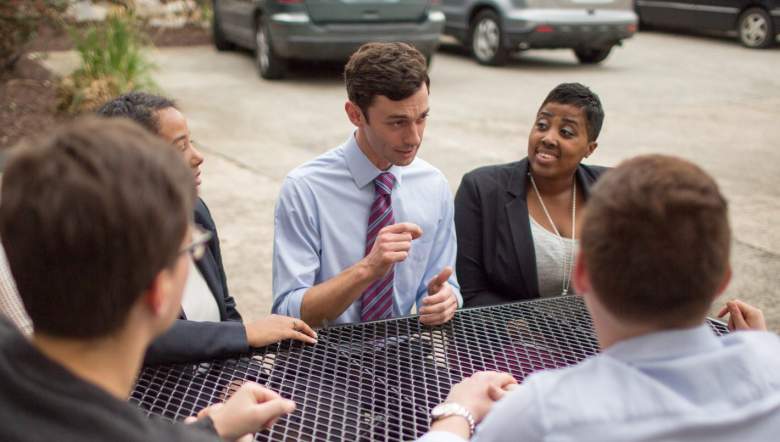 Jon Ossoff sits down to talk to voters. (Daniel Schwartz/Jon Ossoff for Congress)

With a little over one week until voters officially cast their ballots, Georgia’s 6th congressional special election continues to heat up.

The election to replace Republican Tom Price is set for April 18, and over 21,000 voters have already cast their vote.

Early voting for the election started March 27 and wraps up April 14.

The special election race is to fill the vacant house seat left by Price when he was tabbed by President Donald Trump to be the secretary of the Department of Health and Human Services.

The seat has notoriously been held by a Republican ever since Democrat Jon J. Flynt Jr. was elected in 1965. But an all-out effort by Democrats to get front-runner Jon Ossoff elected seems to be paying off, at least in polls and fundraising.

The race has become so close that The Cook Political Report hanged its projection to a “toss up.”

Here’s what you need to know about the race so far:

Data from early voting, both via absentee ballott and in-person, has grown steadily over the past few weeks as the election nears.

Michael McDonald of ElectProject, a platform that provides statistics of voting in U.S. elections, projected that early voters are getting younger in age, with even more showing no history of having voted in prior elections.

In the November 2016 elections, 186,496 people voted early. That number is at just over 21,000 now and appears to show Ossoff claiming victory in the first round.

McDonald has been charting the data from early voters in the district, and it’s shown that people who identify as Democrats heavily outweighed votes cast by Republicans.

#GA_06 early vote (absentee and in-person) graphics for the past week pic.twitter.com/oNOY29UBVZ

That seems to bode well for Ossoff, however he will be faced with another tough task if the election heads to a runoff and he’s going against one Republican candidate.

Early Polling Shows Ossoff Ahead, Slew of Republicans In 2nd

In addition to Ossoff, there are 17 other candidates running in the special election.

In the most recent poll performed by Survey USA on behalf of WXIA-TV Atlanta, which was run from March 27-April 2, Ossoff garnered 43 percent support compared to Republican candidate Karen Handel’s 15. Republicans Bob Gray (14 percent) and Dan Moody (7 percent) followed closely behind with a 4.5 percent margin of error in the poll. It’s the fourth official poll that shows Ossoff leading the field handily in the race.

Another one performed by Opinion Savvy on behalf of FOX 5 Atlanta from March 22-23 showed Ossoff getting 40 percent to Handel’s 20 percent. Gray got 10 percent, Republican Judson Hill got 10 percent and Moody came in at 8 percent.

If no candidate in the race can get 50 percent, then its top two finishers will face each other in a runoff election on June 20.

Fundraising For the Special Election

The Ossoff campaign reported a record amount of fundraising to represent suburban Atlanta. His $8.3 million in fundraising and $2.1 million on hand for the last few days of campaigning is the most ever in the district and the most since Democrat Randy Perkins put up $9 million of his own money in a 2016 congressional race in Florida.

That’s saying a lot for a 30-year-old candidate that’s never ran for political office before.

Ossoff’s stockpile of funds came from all parts of the nation, including over $1 million that was raised by liberal website the Daily Kos.