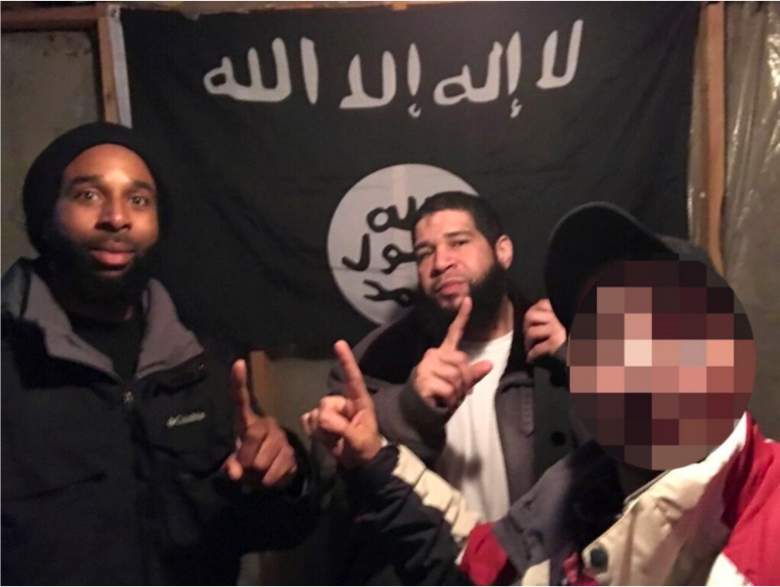 Joseph D. Jones and Edward Schimenti posing in front of the ISIS flag. The FBI source’s face is pixelated to hide his identity. (Justice Department Photo)

Two men from a Chicago suburb were arrested today on a federal complaint charging them with conspiring to provide material support to the Islamic State, or ISIS.

Joseph D. Jones, also known as Yusuf Abdulhaqq, and Edward Schimenti, also known as Abdul Wali, both 35 and of Zion, Ill., allegedly “pledged their allegiance to ISIS and advocated on social media for violent extremism,” according to the Justice Department.

Federal authorities were also set to search Jones’ house in Zion today. The men were scheduled to appear in U.S. District Court in Chicago this afternoon.

Jones and Schimenti also posed for this phot in front of the ISIS flag, Feds say pic.twitter.com/CMsKxNOuAM

According to a complaint and affidavit filed in U.S. District Court in Chicago, during the fall of 2015 the two men befriended three people they thought were fellow ISIS devotees. But in reality, two of the individuals were undercover FBI employees and the third was a “confidential human source” cooperating with law enforcement officials and was not an ISIS supporter.

Federal documents allege both Jones and Schimenti helped the cooperating source with plans to travel overseas to join ISIS and gave them cell phones to use as bomb detonators. The duo reportedly met the undercover FBI employees and the cooperating source on numerous occasions, when they discussed their devotion and commitment to ISIS, according to the complaint.

Some of the meetings took place in Waukegan, Zion, Bridgeview, North Chicago, Highland Park and Chicago, in Illinois, according to court documents

2. They Gave Informant Cell Phones To Use As Detonator, According To Officials 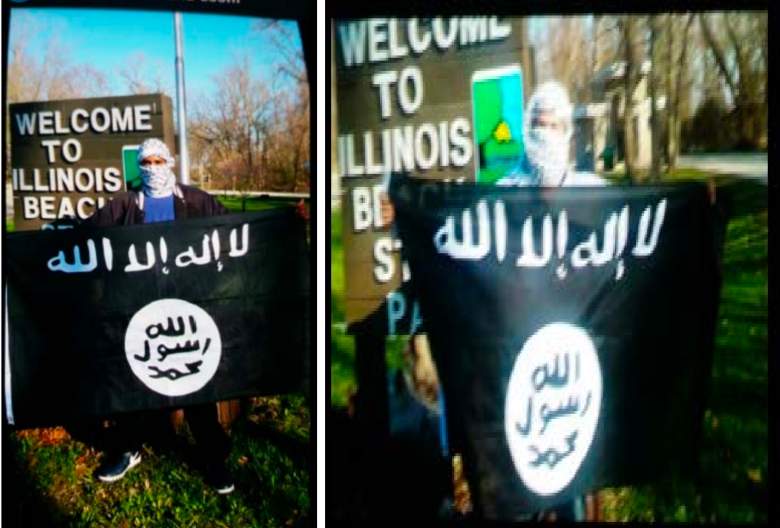 This photo from court documents allegedly shows the men posing with the ISIS flag outside a state park. (Justice Department)

According to court documents, in November 2016, Schimenti met the FBI “confidential human source,” who he believed was from Iraq and who had a brother who was an ISIS member.

Schimenti allegedly told the confidential source that he supported ISIS and “believed in violent jihad.” After the informant said they wanted to return to the Middle East to fight on behalf of ISIS, Schimenti reportedly introduced them to Jones, who allegedly was in contact with an undercover FBI agent who “had a purported ISIS facilitation network.”

The federal complaint alleges Jones introduced the confidential source to the undercover FBI agent “to facilitate the (source’s) travel to fight on behalf of ISIS.”

The men reportedly gave the informant cellular telephones “with the understanding that the phones would be used as detonators for overseas IED attacks by ISIS.”

3. They Allegedly Trained for War

He also reportedly told the informant: “Man you know I’m all big, fat … but inshallah (God willing) the brothers will just have me be the one to cut the neck.”

According to court documents, Schimenti said the gym at their place of employment opens at 5:30 a.m., and that he would meet the informant there whenever he wanted to work out. He also reportedly told the confidential source that “he was angry with a person at their job because that individual was a homosexual.”

If “Sharia (Islamic Law) comes here, we are putting you [homosexuals] on top of Sears Tower and we drop you,” Schimenti reportedly said.

According to the court documents, on April 7, Schimenti and Jones ate dinner with the informant, who was set to leave Chicago and travel to Syria “to join and fight with ISIS.”

During their conversation, which was recorded, Jones reportedly said he felt guilty he wasn’t traveling, too.

Also, Schimenti reportedly said told the confidential source “drench that land with they, they blood.”

After the meal, they allegedly drove the source to O’Hare International Airport in Chicago.

5. They Face Time in Federal Prison If Convicted

"I want to see blood flowing"
– Two men from Zion, IL charged with conspiring to provide support to ISIS. Latest on @WGNNews at 4-7pm. pic.twitter.com/o74ryObA0l

Jones and Schimenti shared photos of themselves holding the ISIS flag at the Illinois Beach State Park in north suburban Zion, according to the complaint. Also, in a conversation with the FBI source, Schimenti reportedly said he would like to see the ISIS flag “on top of the White House,” the complaint states.

If they’re found guilty of the charges, they face up to to 20 years in prison.

The case was investigated by the Chicago Joint Terrorism Task Force, which is comprised of FBI personnel and representatives from numerous federal, state and local law enforcement agencies. The Zion Police Department assisted.