Miguel Angel Portillo (C), aged 33, is dressed up as “Empalao” by relatives prior to the procession of the “Empalaos” on April 6, 2012 in Valverde de la Vera, Spain. Empalaos make the steps of the “Via Crucis,” marking the Stations of the Cross, during the night of Maundy Thursday while bound by rope to a crucifix as an act of penance and to honour a promise made to the Empalaos Brotherhood and the Christ of Vera Cruz, in the town of Valverde de la Vera. The process of dressing the Empalao in the traditional costume is taken with great care, with the family and dressers paying attention to ensure that no harm is caused to the penitent and that they are aided in their recovery, including being massaged and rubbed with rosemary alcohol. Many Spanish towns and villages retain such rites and religious traditions, many passed down from medieval times, across the Easter weekend. (Photo by David Ramos/Getty Images)

Today is Maundy Thursday or Holy Thursday, sometimes also called Covenant Thursday, Sheer Thursday, or Thursday of Mysteries. It commemorates the Last Supper and Jesus’ foot washing of the apostles. It comes the Thursday before Easter. The date of Easter is always the first Sunday after the full moon following a spring equinox. This year, Easter is on Sunday, April 16.

Maundy Thursday is preceded by Holy Wednesday and followed by Good Friday. The date is always between March 19 and April 22.

Learn more about the history and origins of Maundy Thursday below!

Cardinal Vincent Nichols washes and kisses the foot of a Chelsea Pensioner during a Maundy service at Westminster Cathedral on April 2, 2015 in London, England. (Carl Court/Getty Images)

Another aspect of Saturnalia included “role reversal,” where servants would be served by their masters throughout the holiday. This role reversal also played out during the Christian Feast of Fools, which may be a contributor to our modern April Fools’.

The Feast of Fools was a feast day first celebrated by the clergy in Europe in the early Middle Ages. It began in northern France but later spread to the majority of Europe. Its original date of celebration was the Feast of the Circumcision on January 1, which marked the circumcision of Jesus. During this time, role reversal was also practiced to mimic Jesus washing his disciples’ feet in John 13:1-17.

The Feast of Fools continued to grow in its rowdiness until it was banned by the Council of Basel in 1431, however it continued to be celebrated at some levels in France as late as 1644.

Role reversal is a common theme in Christianity and is not only played out with Jesus washing his disciples’ feet, but also with his mother, Mary. At the time of Jesus’ birth, Judea was ruled by a Rabbinic ruling class backed by the Romans. Yet, Mary, “low” in the social hierarchy of her time as an impoverished woman and Jew, gave birth to the Christ child. It introduced the idea of power arising from “below” to a new religion, drawing from the pagan customs of the Romans.

The most popular theory for the origin of the word “Maundy” is that it is a bastardization of the beginning of the Latin text of John 13:34, which reads, “A new command I give you: Love one another. As I have loved you, so you must love one another.” In Latin, the verse reads, “Mandatum novum do vobis ut diligatis invicem sicut dilexi vos.” “Maundy” is drawn from the first word of the verse, “mandatum,” which is also the origin of the English word “mandate.”

However, another theory is that “Maundy” comes from “maundsor baskets” or “maundy purses,” which were charity baskets that the king of England gave out to the poor at Whitehall before attending Mass on that day. Thus, “maund” is connected to the Latin “mendicare,” meaning “to beg.” However, according to The Vision of William Concerning Piers the Plowman, this is “utterly wrong.”

3. It Commemorates the Last Supper

Guests look at a life-sized projected image of “The Last Supper” which is 4.6m x 8.8m during a press preview of the digital exhibition “The Da Vinci Code Museum” in Tokyo, 26 April 2006. (TOSHIFUMI KITAMURA/AFP/Getty Images)

Maundy Thursday commemorates Jesus’ Last Supper, which was held on our around the first day of the week-long Jewish festival of Passover.

However, according to the Gospel of John, Jesus had his last supper on Nisan 14, the night before the first night of Passover. Therefore, whether Jesus was celebrating Passover during the Last Supper is up for debate.

According to Biblical Archaeology, we may also be projecting our zeitgeist onto the past, especially because the gospels were written by anonymous authors decades after Jesus died. Biblical Archaeology writes, “if we cannot know how Jews celebrated Passover at the time of Jesus, then we have to plead ignorance, and we would therefore be unable to answer our question.”

4. It Is Celebrated at Night

The Mass or service of worship for Maundy Thursday is usually held at night. This comes from Jewish tradition.

5. It Has Many Traditions Around the World

Cardinal Vincent Nichols kisses the foot of a Chelsea Pensioner during a Maundy service at Westminster Cathedral on April 2, 2015 in London, England. (Carl Court/Getty Images)

The Washing of the Feet is an important traditional component of Maundy Thursday. It is practiced not only by Catholics but also Protestant denominations.

Another ancient tradition is visiting fourteen churches on Maundy Thursday, a reference to the fourteen stations of the cross. The stations come from a series of images depicting Jesus on the day of his crucifixion. The stations are imitations of Via Dolorosa in Jerusalem, which is believed to be the actual path Jesus walked to Mount Calvary. 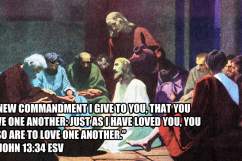