Officer Mauricio Rodriguez Jr., on leave in the infamous David Dao United Airlines passenger dragging incident, told investigators he tried to no avail to get Dao to “leave his seat.”

Dao refused, Rodriguez said, and another Officer, James Long, was the one who used force to remove Dao from the plane, police reports say.

The airline incident went viral after fellow passengers videotaped Dao, a Kentucky doctor, being dragged from the plane because the airline needed his seat. Police reports say the plane was overbooked, and the airline has said it needed to get a crew to Louisville.

Police reports – obtained by Heavy through a Freedom of Information request – reveal previously unknown details about the officers, all of whom have been placed on leave by the airline, which apologized for the manner in which Dao was treated. The doctor has hired a prominent Chicago-based personal injury attorney who says he is a “poster boy” for airline bullying, but the spelling riddled police reports in the officers’ words attempt to cast Dao as a resisting and aggressive passenger.

The other officers named in the reports are Steven Smith and Sergeant John Moore.

1. Rodriguez Gave a Statement ‘Under Duress’ & Described Trying to Get Dao to Leave the Plane

The police reports contain a statement from Rodriguez.

In the report, Rodriguez said he was giving a statement under duress and not voluntarily because he didn’t want to lose his job for refusing a direct order. He said that he arrived at the United flight and was “advised by the supervising agent of United Airlines that there was a guest who refused to leave his seat.”

Rodriguez said he tried to persuade Dao to “leave his seat. The subject refused.”

2. Long Is Accused of Wrapping His Arms Around Dao & Dragging Him From the Plane

The police reports indicate that it was Long who got physical with Dao. The videos – streamed by other passengers – of the bloodied doctor as he returned briefly to the airline horrified the Internet.

The police reports give the first accounts of what happened and the roles each officer allegedly played.

Long “wrapped his arms” around David Dao as the United Airlines’ passenger refused orders to leave a flight and then “dragged the victim from the plane and out onto the jet bridge,” according to an account Long gave police in a newly released report from the Chicago Police Department.

At one point, the report says, Dao was “spitting blood” and saying, “I’m going home. Just kill me.”

The account from Long attempted to shift blame back on Dao, painting the passenger as allegedly resisting and becoming injured in a “struggle.” Read more:

According to the accident/incident report, Rodriguez responded to the gate for “2 individuals refusing to deboard.” The United Airlines Supervisor said that “there was 1 individual, Mr. David Dao who was yelling about leaving the aircraft.” The supervisor escorted Rodriguez to where Dao was sitting, and he “made contact with the subject and tried to persuade Mr. Dao to leave in a calm manner,” the report says.

Dao allegedly said, “I’m not leaving this flight that I paid money for. I don’t care if I get arrested,” the incident report contends.

Rodriguez tried for “several minutes” to persuade Dao to leave the flight, and then Smith arrived and advised Dao to leave, but Dao refused.

At that point, Long arrived. He identified himself as an officer and “repeatedly asked the subject to remove himself from the aircraft,” the report says.

The report claims that Dao responded “repeatedly in an aggresive (sic) manner, ‘I’m not getting off.’”

Dao fell and “hit his mouth on the armrest across from him which caused an injury to his mouth” and Long “regained control of the subject,” and he was removed from the plane and brought to the jet bridge, where Dao “layed (sic) down on the deck and claimed to be a diabetic.”

Long told investigating officers that Dao “folded his arms across his body and refused to move from his seat. Long stated he wrapped his arms around Dao as the subject continued to resist and the victim struck his lip during the struggle. Long said he dragged the victim from the plane and out onto the jet bridge as D.O.A. P.O.s Rodriguez and Smith assisted him,” the report says.

3. United Has Placed All of the Men on Leave & Apologized for the Incident

Aviation Security Officer James Long, in jeans, was suspended after dragging David Dao off a United flight in Chicago.

United has released a statement saying that the incident was not “standard operating procedure.” Dao’s Chicago lawyers previously held a press conference with his daughter. His lawyer, Tom Demetrio, described Dao as a “poster boy” for bullying by airlines.

“We owe each other an ordinary care standard,” said Dao’s attorney Demetrio on April 13 at the press conference. Airlines have the “highest” requirement of care for their paying passengers, he said.

“That was not done in this case,” Demetrio said, with Dao’s daughter, Crystal, sitting next to him. “I would defy anyone” to say there was not unreasonable “force or violence” used to get Dao off the plane, Demetrio said, adding that he had received many calls from employees and former employees from United, as well as other passengers.

In addition to apologizing, the airline said it will no longer use police officers to forcefully remove passengers who refuse to give up their seats in an overbooking situation. “The incident on United flight 3411 was not in accordance with our standard operating procedure and the actions of the aviation security officer are obviously not condoned,” Aviation Department spokeswoman Karen Pride said in a statement.

The incident report says that Long responded to what was called a “2 person disturbance for a refusal to leave the aircraft.”

Long said that he “announced that he is an officer and joined in trying to get the subject to exit the aircraft. The subject continued to refused (sic) to leave and said, ‘I’m not leaving’ and folded his arms tightly,” according to the incident report.

Ofc. Long asked the other officers to assist in removing the subject. When Ofc. Long tried to reach out to hold the subject, the subject started swinging his arms up and down with a closed fist. Ofc. Long was able to grab the subject and pull him away from the windown (sic) seat towards the aisle.

The report claims that, according to Long, Dao “started flailing and fighting. Consequently, the subject was able to knocked (sic) the right hand of Ofc. Long off of his arm and shoulder area, which caused the subject to fall, hit, and injured (sic) his mouth on the armrest on the other side of the aisle. At this time, Ofc. Long was able to regain control of the subject and was able to remove the subject from the aircraft with the help of” another person.

According to the police report of the incident, upon arrival, Dao was observed “laying on the jet bridge floor, in front of the open door of U.A. Flight # 3411.”

4. The Reports Say That Dao & His Wife Were Asked to Leave the Plane Because it Was ‘Overbooked’ & Rodriguez Was the First to Arrive

Rodriguez was the first on the scene and called for backup, at which point officers Long and Smith arrived, the reports say.

The responding officer spoke with the lead flight attendant who said that a supervisor “requested the victim and his wife…deplane due to Flight #3411 being overbooked.”

This contradicts later reports that Dao was asked to leave because United needed to get a flight crew to Louisville, the plane’s destination.

The police report says that Dao “refused to deplane.”

A witness observed “Long grab the victim under his arms and the remaining (2) D.O.A. officers carry him out,” according to the police report.

According to a witness who was a passenger, Dao – referred to as “the victim” in the police report – “was observed striking his face against an arm rest as D.O.A. officers attempted to escort the victim from the flight. D.O.A.”

Dao told authorities that he and his wife “listened to an announcement requesting volunteers to surrender their airline seats, aboard Flight #3411, for reimbursement of $800 per person.”

Both doctors, Dao said they both expressed interest initially “but declined after learning they were not guaranteed a flight later this evening. Victim stated he had to see patients tomorrow and could not accept a next day flight.”

Dao said that he and his wife “were then told the computer had selected them as candidates to surrender their seats.”

Dao said that that all he remembers was “a tall, black guy, lift me up and throw me to the floor,” the police report says. The ER doctor said Dao was in stable condition and would be admitted overnight, the report says.

5. Rodriguez’ Personnel File Doesn’t Show Any Other Incidents & Dao Was Saying the Officers Would ‘Have to Kill Him,’ Reports Say

The incident report says that Dao “was brought out to the jet bridge area. He was limp so the subject was laid on the floor. He began talking about a minute later.” Dao was asked if he wanted water and said yes but then got up and ran back into the aircraft. “The subject said they’ll have to kill him,” the incident report says.

Officer Smith gave a statement “under duress” that he said was not voluntary and was only being given because he was told he could lose his job if he refused a direct order. 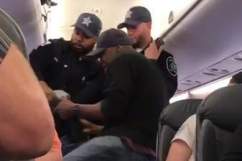 Loading more stories
wpDiscuz
0
0
Would love your thoughts, please comment.x
()
x
| Reply
Mauricio Rodriguez was identified as one of the officers placed on leave over the David Dao United Airlines passenger dragging incident.