A video showing a 22-year-old Colorado State University student being slammed to the ground by Fort Collins Police while she was being arrested outside a bar last week has gone viral.

The video, which you can watch above, was posted by Barstool Sports with the caption “seems excessive,” has been viewed hundreds of thousands of times, sparking controversy. The incident occurred on April 6, according to Larimer County Jail records.

Police said the woman, wearing a black dress and high heels, had assaulted an officer prior to the start of the video. That is not seen in the 9-second video clip, which appears to have been recorded off of Snapchat.

Michaella Surat, 22, was charged with third-degree assault and obstructing a peace officer after the incident, The Fort Collins Coloradoan reports.

The incident was also captured on body-worn cameras, and that video will be released following the conclusion of an investigation, police said.

The arresting officer is identified in police reports as Fort Collins Officer Randall Klamser, who patrols the Old Town area, but it is not clear if he is the officer seen in the video.

1. Surat ‘Shoulder-Checked’ a Bouncer & Assaulted an Officer Before She Was Taken Down, Police Say

Kate Kimble, a spokesperson for the Fort Collins Police, told The Coloradoan the officers were called to area near the Bondi Beach Bar in Old Town for a fight between two men. One of the men was Michaella Surat’s boyfriend, police said.

Kimble told The Coloradoan officers were gathering information when Surat, “shoulder-checked the bouncer and an officer and then pulled her boyfriend from the area.”

Kimble told the newspaper that Surat was told she was free to leave, but her boyfriend was not. Surat did not leave the area and she then “physically obstructed and struck an officer,” Kimble said.

Police said Surat then assaulted an officer and was taken down to the ground, as seen in the video.

The brief clip also shows a man, possibly Surat’s boyfriend, trying to come to her aid, but being restrained by another bystander.

She suffered a concussion, several bruises and a chin contusion, her family told ABC News.

2. A Police Spokeswoman Says the Officer Used ‘Standard Arrest Control’ to Subdue Surat, but the Use of Force Is Being Investigated

Fort Collins Police Chief John Hutto said in a statement the cell phone video is missing the context surrounding the arrest. He said the body camera footage shows the full incident, but it will not be released at this time because of the pending investigation.

“As with most events of this type, the short, publicly-available video does not have the context or content of the full event,” Hutto said. “Additionally, rarely in use of force situations is there agreement from all the parties involved as to the appropriateness, efficacy, or necessity of its use. These questions are only answered through the analysis of all the evidence after the fact.”

Hutto said in his statement:

I have a duty to preserve and protect the processes that our society has put in place to ensure that the questions surrounding this incident are answered in a fair and impartial manner. I have no control over the video that is already in the public domain, but I do have control over the release of the video evidence from our body-worn cameras. This is an open investigation and to release evidence, absent a truly compelling reason, would not be proper. I am committed to preserving a process that ensures a fair and impartial outcome. I am equally committed to preserving the rights of both Ms. Surat and the involved officers.

Hutto said the incident will be “thoroughly investigated” and the body camera video can then be released to the public.

“The court process will take place and there will be an internal review of the officer’s actions from the perspective of policy and procedure,” Hutto said in a statement.

An attorney representing Michaella Surat told KMGH-TV it is “disturbing at best” that the actions used by the officer in the video are deemed by police to be standard procedure:

We are currently investigating the facts of this case. I don’t believe that the circumstances of the evening of 4/6 dictated this extreme degree of force from the officer and hope that any additional evidence that may exist will be turned over to us quickly. We find the response attributed to law enforcement that this is standard procedure , if true, DISTURBING at best. We hope that additional witnesses come forward and contact my office. We appreciate the overwhelming community outreach and support for Michaella and agree that an independent investigation into this matter would be appropriate. Please respect the family’s privacy while this matter unfolds.

The attorney’s name was not provided in the KMGH report.

3. Surat, a Member of the Gamma Phi Beta Sorority at Colorado State, Says She Was ‘Humiliated’ & Seriously Injured

Surat is a junior at Colorado State University, The Coloradoan reports.

Michaella Surat spoke out during an interview with Good Morning America on ABC on April 13.

“All my bones were shattering in my face…and I was so humiliated and everyone was watching me,” she said. A photo from her hospital bed shows the nasty bruise under her chin:

“I found out my boyfriend got kicked out of the bar and so I went outside just to see what happened — and then the altercation happened and one thing led to another and it just escalated,” she told Good Morning America.

“I was extremely appalled,” her attorney, Andrew Bertrand, told ABC News. “Certainly my client Michaella…she was confused about where her boyfriend was. She looked highly irritated, but nothing I saw in that video warranted this.”

Bertrand said the officer was “very aggressive” during the incident.

“I would like an apology or an explanation to why it escalated to the point of body slamming me into the concrete,” Surat said. She is still recovering from her injuries.

“I can’t open my mouth to eat. It just hurts to clench down,” she told ABC News.

Surat’s father said he can’t bring himself to watch the video. But he said things easily could have been worse.

Surat said that along with her injuries, she has faced backlash on social media.

“I can’t go to school without worrying someone’s going to assault me, I’m getting death threats,” she told ABC News.

She is a member of the Gamma Phi Beta sorority, according to her Facebook page.

Surat is from Centennial, Colorado.

Her boyfriend’s name hasn’t been made public and he is not facing charges.

Surat wrote on her private Instagram profile, “forgive me for my wrongs, I have just begun.” 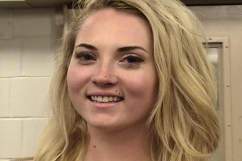 4. Some Have Said the Officer Didn’t Need to Use Force, While Others Say He Was Justified & the Video Doesn’t Show the Entire Incident

Some commenters and others on social media have said the woman did not need to be thrown down, while others said the actions by police were justified and that the video didn’t show the whole incident.

“Resisting arrest does NOT warrant this man to slam this woman into the ground. He could’ve grabbed her and cuffed her. If she was drunk it would’ve been 10 times easier to cuff her,” one person wrote.

“90 pound drunk slammed face first.. you are a f*ck head…. hope no one does you like that. You have to asses the threat,” another wrote.

One man wrote on Facebook, “Big tough 90 pound girl intimidated your officer. So naturally he slams her face to the ground instead of handling the situation as a man. Why are police so thin-skinned and delicate?”

But others came to the officer’s defense.

“Why don’t you show the ENTIRE video where she HIT the officer and they resisted when told she was under arrest? No, just show the cherry picked section to forward your cop hating agenda,” one person wrote.

Another wrote on Facebook, “Did she need to be body slammed, maybe…maybe not, but she chose to resist the officer and created her own consequences. Procedure should be followed whether you are male or female. She chose to be obstinate and the officer had every right to stop her. If she were wise, she would have left or let the officer do his job. I support FCPD!”

And a third wrote on the chief’s statement about the incident, “Until there is substantiated evidence to support otherwise, I will always side with the police. Resisting arrest, failing to comply, and assaulting an officer is not acceptable under any circumstances. Police need to make split second decisions to ensure the safety of the public and themselves. If you don’t want to get body slammed, abide!”

5. Surat Posted $1,750 Bail After Being Booked Into the Larimer County Jail

Surat posted $1,750 bail after being booked into the Larimer County Jail on April 6 on charges of third-degree assault and obstructing an officer.

Both charges are misdemeanors.

She was scheduled to appear at the Larimer County Justice Center on Wednesday, April 12, at 1:30 p.m. for her arraignment. It was her first court appearance in the case. A disposition hearing is scheduled for next month.

Loading more stories
wpDiscuz
45
0
Would love your thoughts, please comment.x
()
x
| Reply
Michaella Surat, a 22-year-old Colorado State student, was slammed down while she was being arrested by Fort Collins Police. Video of the incident has gone viral.