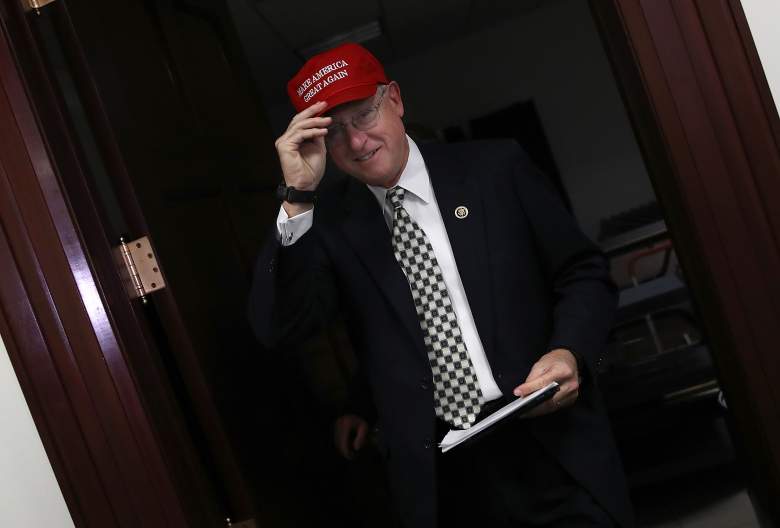 Texas Representative Mike Conaway will lead the investigation into Russia’s role in the 2016 election.

This comes as Devin Nunes, chair of the House Intelligence Committee, announced he is stepping aside from the investigation.

“I believe it is in the best interests of the House Intelligence Committee and the Congress for me to have Representative Mike Conaway, with assistance from Representatives Trey Gowdy and Tom Rooney, temporarily take charge of the Committee’s Russia investigation…” Nunes said in a statement.

Here’s what you need to know about Mike Conaway, who will now lead the Russia investigation.

1. He Was a Supporter of Donald Trump During the 2016 Election

Mike Conaway supported Donald Trump for president during the 2016 election. However, this support came with reservations.

In August 2016, Conaway said that he supports Trump because he makes good decisions, especially when it comes to his picks for the Supreme Court, and because Mike Pence is his vice president. Conaway did say, however, that he had some concerns about Trump’s rhetoric.

Arguing why voters should support Trump, Conaway pointed to the vacancy on the Supreme Court and the fact that Donald Trump is not Hillary Clinton.

“I can see at least one Supreme Court vacancy in the next presidential term,” Conaway said, according to San Angelo LIVE. “We might even have three. And I want Donald Trump getting those nominees because while presidents come and go, and we’ll try to unwind Obamacare after the current president leaves. If a Supreme Court decision goes the wrong way, we may have to change the Constitution to fix that.”

In October, after a tape was released on which Donald Trump talks about grabbing women by their genitals without consent, some Republicans rescinded their endorsement of Donald Trump. However, Mike Conaway was not one of them.

“Nobody could defend that, he’s apologized — his remarks are indefensible, and only the media is asking anyone to defend them,” Conaway said, according to GoSanAngelo. “They were horrible, awful, and he’s probably embarrassed. He’s sincerely apologized and asked for forgiveness. … It is what it is, awful, but by the same token, no candidate is perfect.”

He also said, “I refuse to do anything that would help Hillary (Clinton) become president.”

2. He Compared Hillary Clinton Bringing Mexican Entertainers to Her Rallies to Russia Interfering in the 2016 Election

During the 2016 election, a number of Mexican entertainers, including actors and singers, came out to Hillary Clinton rallies to show support for the Democratic presidential nominee. In an interview in January 2017, Mike Conaway compared this to Russia interfering in the election.

“Harry Reid and the Democrats brought in Mexican soap opera stars, singers and entertainers who had immense influence in those communities into Las Vegas, to entertain, get out the vote and so forth,” Conaway told The Dallas Morning News. “Those are foreign actors, foreign people, influencing the vote in Nevada. You don’t hear the Democrats screaming and saying one word about that.”

When asked a followup question about whether he considers this to be as damaging as Russia releasing information to damage the Hillary Clinton campaign, Conaway said, “Sure it is, it’s foreign influence. If we’re worried about foreign influence, let’s have the whole story.”

This is a pathetic and offensive attempt to try to diminish the consensus that Russia meddled in the 2016 election to boost Donald Trump. https://t.co/XEVmmLatBD

3. He Has Expressed Doubt that Vladimir Putin Wanted Donald Trump to Win the Election

Comey said during the hearing that “Putin hated Secretary Clinton so much that the flip side of that coin was that he had a clear preference for the person running against the person he hated so much.”

Conaway responded by saying, “Yeah, that might work on Saturday afternoon when my wife’s Red Raiders are playing the Texas Longhorns. She really likes the Red Raiders…but the logic is that because [Putin] really didn’t like…Clinton, that he automatically liked Trump. That assessment is based on what?”

Comey responded by saying that if Putin wanted Hillary Clinton to lose, by definition this means that he wanted Donald Trump to win.

Mike Conaway has served in the House of Representatives since January 2005, having been elected in November 2004. He overwhelmingly defeated his Democratic opponent that year, earning 76 percent of the vote.

During his first re-election in 2006, Conaway ran unopposed.

In 2012, Conaway was challenged in the Republican primary by Chris Younts and Wade Brown, but he was still able to secure the nomination and win the election with 78 percent of the vote.

5. He Is Married to Suzanne Kidwell Conaway & Has Four Kids

Mike Conaway is married and has four kids.

His wife, Suzanne Kidwell Conaway, was a supporter of Donald Trump like her husband, and in October 2016, she defended Trump’s comments on the leaked Access Hollywood tape.

“I think women are smarter than that,” Conaway said, according to Mediaite. “I don’t think that we’re giving women enough credit to look past some lewd remarks that somebody might have made to get onto the policies that affect our life in America.”

She also defended Trump against allegations of sexual assault, saying that these allegations were unsubstantiated.