On April 2 Mount Asama, a volcano on the border of Japan’s Gunma and Nagano prefectures, erupted. People in the vicinity immediately took to Twitter to share photos of the impressive event. The Japanese caption in the tweet above translates to “Lit by the setting sun at Asama volcano eruption.” (All translations come from Bing.)

This message says “That? Far away, well I don’t know, but the eruption of the Asama?”

This one also asks “Not the eruption of Asama volcano?”

“Mt. Asama fine smoke on that was erupted I wonder?” 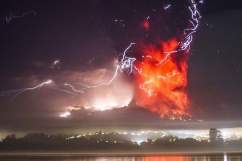