An unarmed black man accused of jaywalking was thrown to the ground and beaten by a white Sacramento police officer, who has now been suspended during an investigation.

The alleged jaywalker, Nandi Cain Jr., 24, was walking home on April 10 when he was stopped by an unidentified police officer and brutally arrested, KTXL-TV reports.

A video of the incident, called “disturbing” by police, was recorded by a bystander and posted to Facebook, sparking outrage. You can watch the video below:

The police department said in a statement the videos show “unacceptable conduct” by the officer.

The officer, a 2-year-veteran, has not yet been named. He has been placed on paid leave pending the outcome of the investigation.

1. Videos Show the Officer Accusing Cain of Jaywalking Before Tackling Him to the Ground & Punching Him Repeatedly

The incident began April 10 about 5 p.m. when a uniformed patrol officer tried to stop a pedestrian he believed had crossed a street “unlawfully” at the intersection of Cypress Street and Grand Avenue in the Del Paso Heights neighborhood, Sacramento Police said in a press release.

“The solo officer, a two-year veteran of the department, exited his patrol vehicle and attempted to talk to man regarding the perceived violation,” police said. “The pedestrian questioned the officer’s validity to stop him at which time a violent encounter occurred between the officer and the pedestrian.”

Police said the man, later identified as Nandi Cain Jr., was given multiple verbal commands to stop, but did not.

“A verbal exchange occurred in the street between the two and the pedestrian began removing his jacket, challenging the officer to fight. The officer charged at the pedestrian to take him into custody,” police said. “For an unknown reason, the officer threw the pedestrian to the ground and began striking him in the face with his hand multiple times. Within a few moments, additional officers arrived to assist in handcuffing the suspect.”

In addition to to the Facebook video you can see above, dashboard cameras also captured parts of the incident and have been released by the police department. You can watch the first video below:

The video shows the officer driving his patrol SUV down the road. Cain can be seen crossing the street at an intersection as cars drive past. The officer then radios in that he will be stopping Cain and drives alongside him.

He pulls to a stop and exits his SUV, following Cain and telling him to stop.

“Come here, bud,” the officer says. “Get your hands out of your pockets.”

Cain raises his arms into the air and keeps walking. He can then be heard responding, but it’s not clear what he says. The officer responds, “I do, you were jaywalking. … You were jaywalking back here.”

Cain tells the officer, “I looked both ways.”

The officer says to Cain, “Stop right now, before I take you the ground.”

Cain tells the officer he is harassing him and says, “You want to pull me over for nothing. I just got out of work.”

Cain can be seen walking into the road, in front of the car in which a woman was also recording the incident while the officer continues to tell Cain to get onto the ground.

Cain says to him, “your a big man because you’ve got a gun?” He then begins to take his jacket off, saying, “I don’t got nothing,” and says that if the officer was a “real man,” he’d get rid of his gun and fight.

The officer then takes Cain down to the ground and begins punching him repeatedly.

The video shows the incident from a distance and also shows Cain in the back of the patrol SUV after he was arrested.

Two other videos from officers who responded as backup were also released. In the first video, the suspended officer can briefly be seen on top of Cain as an officer arrives at the scene as backup:

The second video shows the scene after Cain has already been handcuffed as two more officers arrive:

The videos were released by police less than 24 hours after the incident.

“We recognize the significance of this incident and the importance of providing timely and factual information to the community,” the police statement said. “In the Department’s ongoing effort to be more transparent and accountable, related video which captured the event is being released.”

2. He Was Arrested on Suspicion of Resisting Arrest, but Later Released Without Being Charged

“After the altercation with the officer, the man was handcuffed and arrested for resisting arrest and an outstanding misdemeanor warrant out of Fresno County,” police said in a statement. “While in the backseat of the patrol vehicle and before being transported to the Sacramento County Jail, the subject began to violently kick the interior of the patrol car and had to be restrained by a leg hobble. Once at jail, the suspect continued to be physically resistive with Sheriff Deputies.”

According to police, investigators determined there were “insufficient grounds” to make a criminal complaint against Cain. The criminal charges were dropped and Cain was released from custody at 2:30 a.m. Tuesday.

He received a court date for the outstanding Fresno County warrant. It is not believed that the officer knew about the warrant before stopping Cain.

3. Cain Says He Feared for His Life & Thought He Was Going to be the ‘Next Trayvon Martin’

Nandi Cain told KCRA-TV he feared for his life, thinking the officer was going to shoot him.

“I thought I was going to be like the next Trayvon Martin,” he told the news station. “I thought, as soon as they got me on the ground and they start putting my arms in different positions. I felt like they were going to draw a gun out and shoot me in my back or try to break my arms off or something.”

He told KTXL-TV, “When he started pushing up on me like that, I’m like, ‘I’m not going to give this man any reason to kill me, to gun me down.’ I could’ve tried to fight back but that’s when guns would’ve been pulled out and I would’ve gotten shot. I would’ve been dead.”

Cain told KCRA he was walking home from work and said he tried to ask the officer why he was stopping him. He said the officer kept asking him to take his hands out of his pockets and drop any weapons.

“As a form of defense, I took off my jacket to let him know that I am unarmed,” he said. “I don’t have anything. This is what you see. What you see is what you get. And he got mad, and he started taking off on me.”

BLM protesters assembling at SacPD North on behalf of Nandi Cain Jr, the man beaten by an ofc Monday.@FOX40 pic.twitter.com/FMJeJCb9Y4

He told the news station he doesn’t know why he was targeted.

“I don’t like to go with the stereotypical,” he said. “But you know, it’s a new day, it’s a new age. But you know what, racism is still alive too. And I can’t ignore that it is. It could be that, it could be something else.” 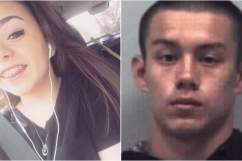 4. Cain Is a Musician, Construction Worker & Student at a Local College

Cain, originally from Fresno, California, lives in the Del Paso Heights neighborhood of North Sacramento, near where he was arrested on Monday.

According to his Facebook page, he works in construction and demolition and is a student at San Joaquin Delta College, studying radio and television.

Cain is also a rapper, performing under the names Lil Storm and YoungRo DaKidd:

To all my friends and family who supported me in this on going investigation. I just want to say thank you for you’re support and prayers. Those who knows me knows how strong I feel about this . I never knew I would be the one walking in those shoes. But hey God gives his toughest battles to his toughest soldiers ?.

I’m going to get some rest now I’m very exaughsted. Justice will be served. Thank you ! Much love peace and unity #BlacklivesdoMatter ?✊?

Protests were held in Sacramento by the local chapter of Black Lives Matter and other activists. Cain posted a photo of his mother at the protests.

“This protest going crazy in Sacramento,” he wrote.

His girlfriend was also there, the Sacramento Bee reports. She told the newspaper he was “still in pain and recovering.”

5. A Sergeant Says They Are Taking the Incident ‘Seriously’ & the Officer’s Actions Don’t Represent the ‘Men & Women of This Police Department’

Police said the suspended officer will be facing an Internal Affairs investigation, along with a criminal probe.

Sacramento’s mayor and 19 citizens spoke out about the arrest at a city council meeting Tuesday night, KTXL-TV reports.

The mayor praised the quick release of the “extremely disturbing” video.

“It has been transparent, it has been swift, and it has reflected the same sentiment and desire for accountability as expressed by the community,” Steinberg said.

He said the officer’s actions are “not representative of the training nor the expectations we have for our Police Department.”

The woman who recorded the video, Naomi Montaie, told the council, “I am so hurt. I am so distraught. I am so confused. I am so traumatized,” KTXL reports.

“I don’t trust anything that they do right now. We saw what we needed to see. Not only does that officer need to be fired, but he needs to be held accountable with the law for what he did,” said Tanya Faison, of Black Lives Matter, said at the council meeting.

Police said the results of the criminal investigation will be turned over to the Sacramento County District Attorney’s Office, which will decide if criminal charges are filed.

“I can tell you the actions of this officer does not represent the men and women of this police department,” Sacramento Police Sergeant Bryce Heinlein told the news station. “I can tell you the video speaks for itself and you know obviously we taking this seriously.” 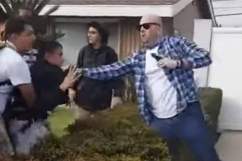 Loading more stories
wpDiscuz
24
0
Would love your thoughts, please comment.x
()
x
| Reply
Nandi Cain Jr., 24, was thrown to the ground and punched by a Sacramento police officer who stopped him for jaywalking. A bystander recorded video of the beating.