New Supreme Court Justice Neil Gorsuch has cast his first vote on the court, and it allowed the State of Arkansas to execute Ledell Lee, a death row inmate whose lawyers claimed was intellectually disabled due to fetal alcohol syndrome.

Lee, who was represented in court by an intoxicated attorney, was convicted in the brutal murder of a woman in her home with a tire thumper (and he’d also been convicted previously of rapes). The execution was part of a sped-up execution plan that Arkansas announced. The state wants to execute eight inmates in 11 days because a lethal injection drug it has is set to expire.

Lee was put to death on April 20, according to CNN, despite a flurry of court actions. Lee maintained that he was innocent in the 1993 slaying of Debra Reese. The U.S. Supreme Court initially stayed the execution, but then lifted the stay.

Human rights groups argued on Lee’s side; in one odd twist, it was revealed the judge was having an affair with the prosecutor, whom he later married, the ACLU contended.

The Supreme Court decision to allow the state to execute Lee was 5-4, reports The New York Times, which said that Neil Gorsuch joined the majority, which did not explain its decision.

There was a sharp dissent, however, over Lee’s claim that “Arkansas’ use of midazolam to render him unconscious before stopping his heart was cruel and unusual in violation of the Eighth Amendment,” reported Slate.

Stephen Breyer, in a dissent (above), complained about the state’s rationale that it needed to execute the prisoners (Lee and the seven others) before a drug expiration date, The New York Times reported.

“Arkansas set out to execute eight people over the course of 11 days,” dissenting Justice Stephen Breyer wrote. “Why these eight? Why now?…apparently the reason the State decided to proceed with these eight executions is that the ‘use by’ date of the State’s execution drug is about to expire. In my view, that factor, when considered as a determining factor separating those who live from those who die, is close to random.”

(L-R) Chief Justice John Roberts and Supreme Court Justices Anthony Kennedy, Stephen Breyer, Sonia Sotomayor and Elena Kagan arrive for U.S. President Donald Trump’s first address to a joint session of the U.S. Congress on February 28, 2017 in the House chamber of the U.S. Capitol in Washington, DC. Several Supreme Court Justices did not attend, along with one Democrat Representative. Most Democrats did attend, but some showed quiet protest by wearing white. (Getty)

The majority – including Gorsuch – was unmoved.

According to the New York Times, Lee received three drug injections: “midazolam, to render him unconscious; vecuronium bromide, to halt his breathing; and potassium chloride, to stop his heart.” The first drug is the subject of controversy after previous “botched” executions, The Times reports.

The majority did not explain its decision to allow the Lee execution to go forth. You can read U.S. Supreme Court documents in Lee’s case here.

The State of Arkansas has been trying to execute eight inmates in all in 11 days in what critics criticize as an unprecedented “conveyor belt” implementation of the death penalty. Lee was one of those inmates.

The state “planned to execute eight inmates …before Arkansas’ supply of the drug runs out at the end of the month,” starting on April 17, reported CNN.

The executions of two others – Jack Jones and Marcell Williams – are now scheduled for Monday, April 24.

Multiple courts have intervened to halt the speedy execution plan, and some of the inmates scheduled to die have won reprieves. For example, Stacey Johnson was set to be put to death on April 20 was given a reprieve from a judge so he can seek enhanced DNA testing in an attempt to prove his claims of innocence. However, courts rejected Lee’s efforts to have new evidence testing.

Lee claimed he was innocent. He was convicted of slaying Debra Reese. According to THV-11, Reese was raped and murdered in her home in 1993 at age 26 and was “struck approximately 36 times with a tire thumper, a tool used by truck drivers to check their tire pressure.” Her husband had given it to her as protection because he was a trucker who was often gone, the television station reported. Reese was also strangled, reports The Arkansas Times.

According to THV, Lee was arrested when “witnesses claimed they saw him walking down the street that Reese’s house was on.” Crime and Capital Punishment reports, “Lee, who had just been paroled after serving time for burglary, was arrested an hour after the murder when witnesses reported seeing him walking the street.”

The eight inmates that Arkansas is trying to put to death. (Correctional photos)

The television station reports that Lee was suspected of other crimes by authorities, including the strangulation and rape of another woman, but that trial ended in a hung jury. He was also convicted of two other rapes, reported THV. “Lee was convicted for the rape of two Jacksonville women and was accused of the murder and rape of 22-year-old Christine Lewis,” reports WZZM, which notes that prosecutors dubbed him a “super predator.”

“In November 1989, Lewis was abducted from her home where she was later raped, strangled, and eventually killed. Her body was later found at an abandoned home inside a closet. That trial ended in a hung jury,” reports WZZM, which adds that prosecutors didn’t retry him in that murder only because he received the death penalty in the slaying of Reese.

According to Arkansas Matters, “The ages of Lee’s victims ranged from 17 to 70” and prosecutors called him a “psychosexual serial rapist.”

An appeal he filed in the case said he was raised in a family of “crushing poverty” where food and adult care were scarce. His mother was 16 and drank alcohol throughout the pregnancy, the appeal says.

The ACLU reports that Lee argued in court that “he has fetal alcohol syndrome disorder, significant brain damage, and intellectual disability. These facts were concealed by the line of counsel plagued with conflicts of interests, substance abuse, serious mental illness, and gross incompetence.”

One of his appeals claimed that some of his lawyers were alcoholics and one was mentally ill.

There were other odd and disturbing twists in the case. “Lee was tried by a judge who concealed his own conflict of interest: an affair with the assistant prosecutor, to whom the judge was later married. Mr. Lee’s first state post-conviction counsel introduced the evidence of the affair by calling the judge’s ex-wife, who testified about the affair after opposing the subpoena. That lawyer, however, was so intoxicated at the hearing that the state moved for him to be drug tested after he slurred, stumbled, and made incoherent arguments,” the ACLU reports.

The Innocence Project reports that Lee wanted new DNA testing in the case: “Numerous unknown fingerprints were found at the crime scene, yet none were from Lee. At trial, the prosecution claimed that two small spots of ‘human blood’ on shoes recovered by the police from Lee were likely the victim’s blood. Yet despite the extremely bloody nature of the crime, no other blood was found anywhere on Lee’s shoes, or any of his clothing. Newly available DNA testing could prove whether the spots were in fact victim’s blood.”

The Innocence Project says there are also hairs it wanted tested that “the state’s experts claimed that the hairs were ‘consistent’ with Lee’s based on microscopic examination – a forensic method that has since been discredited.”

According to The Arkansas Times, Lee’s attorneys “argued that they should be allowed to locate crime scene evidence collected in 1993, including a single hair and a Converse shoe with a pinhead-sized spot of human blood on it, for modern DNA testing. They hope testing can prove that the African-American hair found at the crime scene belongs to someone other than Lee, and that the speck of blood found on Lee’s shoe does not belong to the victim in the case.”

Reese’ son has called Lee the “embodiment of evil that should never have to exist in this world,” reported THV. According to WZZM, Joseph Lucky “was a young child when his mother was murdered 24 years ago. To Lucky, his mother was everything to him. He has spent most of life hoping for justice and, most of all, closure for the death of his mother.”

“When she was ripped from my life it started spiral I almost didn’t recover from,” Lucky told WZZM, “and my family has lived in the shadow of this event our entire lives.”

The eight executions – almost one per day – “would have been the most by a state in such a compressed period since the U.S. Supreme Court reinstated the death penalty in 1976,” reported ABC News. 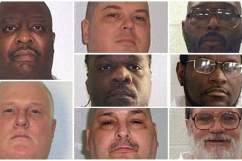