A crash between an SUV and a tractor-trailer resulted in a toxic chemical spill that forced the closure of Interstates 75 and 85 in Atlanta, Georgia, early Monday morning. Local NBC affiliate 11Alive reported that as of three a.m., the Georgia Department of Transportation closed all six northbound lanes I-75-85 northbound corridor, and eventually closed the southbound lanes as well.

The truck was carrying benzoyl chloride, which GDOT said is not considered life-threatening but has a very foul odor. Firefighters had to don HAZMAT suits in order to safely deal with the spill.

Atlanta’s traffic (which under ordinary circumstances is the fourth-worst in the United States, according to a February report by the transportation firm INRIX) has already been far worse than usual, ever since a fire last month caused a bridge collapse in both directions on Interstate 85. Monday’s chemical spill was about two miles south of the still-missing bridge.

The downtown connector in Atlanta is closed in BOTH directions due to chemical spill. pic.twitter.com/67NMb0RkS2

Take a look from the scene – this overturned big rig and spilled hazardous load still blocked I-75/85 both ways. Double #REDALERT pic.twitter.com/gj7LPPGpok

Commuters are advised to find alternate routes to work, or arrange to go in late or work from home.

Now word yet on the condition of the drivers involved in accident that caused toxic chemical spill and shutdown of I75-85 NB/10th St. @wsbtv pic.twitter.com/CXryYEv45I 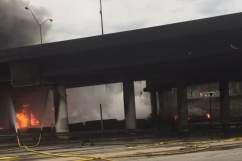