A group of neo Nazis held a rally in Pikeville, Kentucky complete with Hitler salutes.

Photos and videos filled the Internet as the Nazis were met by counter protesters. It was a disturbing display of pro Nazi sentiments in an American city, countered by what is called “antifa” or anti-Fascist protests.

According to the Guardian, Matthew Heimbach, the leader of the Traditionalist Worker Party, “said the groups staging the rally would come with armed security officials, who would carry AR-15 rifles and wear body armor.”

Once again @kystatepolice in frame with Heimbach who has an active warrant #Pikeville pic.twitter.com/afiawv972w

The white nationalists were armed with assault riles, reported one observers on Twitter.

At one point, the crowd was videotaped “giving Hitler salute and chanting hail Heimbach,” according to a freelance photojournalist at the scene. Open “Sieg Heil” gestures were seen on the streets of Pikeville.

Open Sieg Heil gestures and "88" patch (stands for the 8th letter of the alphabet, HH or Heil Hitler) in #Pikeville as the NSM & TWP arrive pic.twitter.com/06JoUeRW3h

Here are more photos and videos from the scene:

People expressed shock on social media at the blatant displays of hate. “This is happening today in Pikeville, Kentucky, where my mom is from, where my grandmother lives, where I spent a bunch of my childhood,” wrote one man on Twitter.

There was a strong police presence as the “alt right” descended on Pikeville.

Others felt the Nazis were unfairly bringing bad media attention to Kentucky. Wrote one man, “Why is it that Kentucky is usually ignored by the media until the neo-nazis show up in Pikeville? Not really proud of that tbh.”

For the #antifa #lulz :) #Pikeville pic.twitter.com/AwNcgQrM6Y

Others responded, “Punch a Nazi in the face, every nation every race.” Antifa slogans were seen; the term refers to anti-fascist activism.

"Punch a Nazi in the face, every nation every race." Pikeville antifa pic.twitter.com/XB6jFEJaCE

According to Guardian reporter Lois Beckett, people shouted “Scum!” at “each other across the barricades.”

"Scum!" In Pikeville where an extremely small number of people are shouting are each other across the barricades pic.twitter.com/mTrgPGtReQ

A woman wrote on Twitter, “My brother is in Pikeville where antifas and a socialist white nationalist group are rallying. No violence just yelling at the moment.” An activist noted, “#Antifa actually marching up to #pikeville white supremacists with League of the South. They are greatly outnumbered.”

#Antifa actually marching up to #pikeville white supremacists with League of the South. They are greatly outnumbered. pic.twitter.com/sG9HP1urFv

People filmed videos at the scene.

Crowed chanting shut the fuck up to drown out the NSM #pikeville pic.twitter.com/NgSt7oKnQU

According to the Guardian, some of the neo Nazis expressed disappointment at Donald Trump, with one man saying he wished he hadn’t voted for Trump because he was influenced by his Jewish son-in-law.

The National Socialists carried a sign that said they were working for a “better tomorrow.”

According to the Guardian, “Pike County is 98% white; about 80% of voters there supported Trump. In choosing Pikeville for their rally, the neo-Nazis sought to attract white working families and build a more mainstream political movement.”

"You're like movie extras we don't have to pay!" a National Socialist from Arizona told the antifa masses across the street. pic.twitter.com/2QYNszLMUx

The rally came as Trump marked the 100th day of his presidency.

According to the Southern Poverty Law Center, Heimbach, the organizer, is “considered by many to be the face of a new generation of white nationalists.”

The site, which tracks hate groups in American, wrote: “Matthew Heimbach founded a campus chapter of Youth for Western Civilization at Towson University in Maryland and later started the White Student Union there. He also has been a member of the neo-Confederate League of the South. Since graduating in the spring of 2013, he has entrenched himself further in the white nationalist movement and become a regular speaker on the radical-right lecture circuit.”

On the same day, there were a series of climate marches in Washington D.C. and other cities. You can see photos of the best climate march signs here: 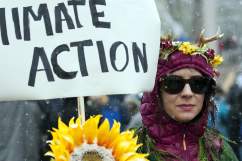 Loading more stories
wpDiscuz
10
0
Would love your thoughts, please comment.x
()
x
| Reply
There was a Nazi rally in Pikeville, Kentucky that was met with Antifa counter protests. See photos and videos.