Protesters in Paraguay clashed with riot police in the capital city of Asuncion and set fire to the Congress building the night of March 31, to protest a secret Senate vote that would amend the country’s constitution (which currently limits a president to a single five-year term) and allow President Horacio Cartes to run for re-election.

Until 1989, Paraguayans labored under a harsh dictatorship. Three years later, the current constitution (with its single presidential term limit) came into effect.

President Cartes belongs to the right-wing Colorado Party, which has held power for 66 of the past 70 years. The Colorado Party is the primary supporter of the constitutional amendment lifting the presidential term limit.

The Colorado Party did not hold power during the presidency of Fernando Lugo, who was ousted in June 2012 in a move which at the time was considered a blow to the country’s young and fragile democracy.

Protesters fear the country may be returning to dictatorship. Despite polls showing 77 percent of Paraguayans oppose amending the constitution to allow for presidential re-election, earlier this week riot police sealed off the congress building while a pro-Cortes senator forced a vote in a move the Guardian described as “steam-roll[ing] through the changes with a show of hands.” A saleswoman named Naomi Muñoz told the Guardian “The truth is that we’re already practically in a dictatorship.”

Protesters took to the streets of Asuncion and also took to Twitter, letting the world know what was happening their country:

#Paraguay: Protesters set fire to Congress after secret vote on bill that would allow President to run 4 re-election pic.twitter.com/lReBQ50dHE

This 20-second video clip shows the inside of the congress building after protesters entered it.

The riots and destruction continues in #Paraguay as protesters enter the parliament. pic.twitter.com/yyTlSyFYcg

A Paraguayan flag lies crumpled and abandoned on a street populated by military vehicles:

I can't find words for this picture #Paraguay pic.twitter.com/AImTyF2M8f

Lebanon’s Al-Manar TV reported that President Cartes responded to Friday’s protest with a statement saying “In the face of vandalism that occurred in the past hours at the headquarters of the National Congress, I urge citizens to remain calm and not let themselves be carried away by those who for months have been announcing acts of violence and bloodshed 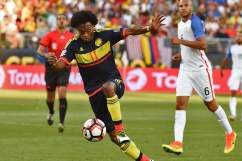 Who Won the Colombia vs. Paraguay Match in Copa America?

Loading more stories
wpDiscuz
0
0
Would love your thoughts, please comment.x
()
x
| Reply
Protesters took to the street of Asuncion, Paraguay on Friday night and set fire to the congress building after a secret Senate vote that would amend the country's constitution and allow President Horacio Cartes to run for re-election.