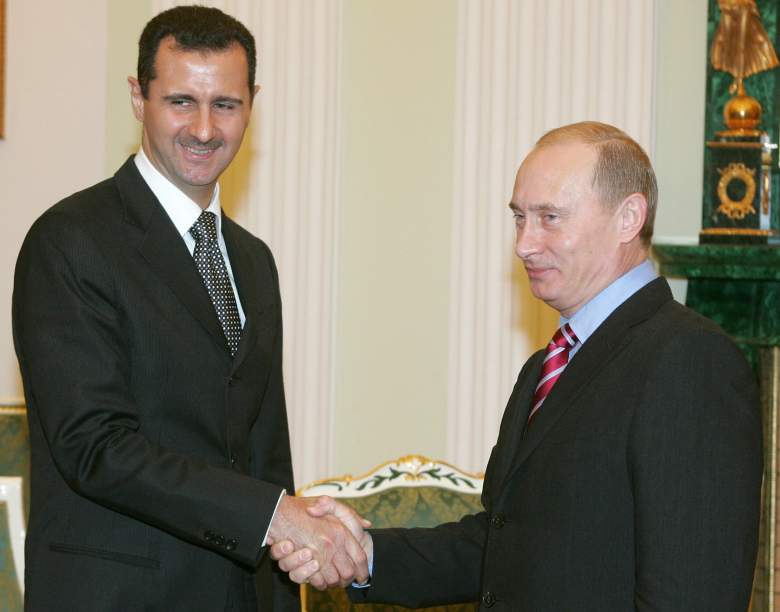 Bashar al-Assad and Vladimir Putin shake hands during a 2006 meeting in the Kremlin. (Getty)

Syrian President Bashar al-Assad is a close ally of Russia, so all eyes are turning to the Russian government in the wake of Donald Trump’s missile attack on a Syrian airfield, and tensions are flaring between the two super powers, with the Kremlin calling the bombing an act of “aggression.”

A Russian warship was seen entering the eastern Mediterranean Sea, heading toward the US Navy destroyers that were responsible for launching the missiles. It’s not clear why the ship was doing so.

#BREAKING US strikes in Syria 'aggression against sovereign state': Kremlin

Furthermore, RT reported after the missile attack that Viktor Ozerov, chair of the Russian Senate security and defense committee, called the American bombing “an act of aggression against a UN member.” The site reported that Ozerov “added that Moscow would call an emergency UN Security Council meeting to discuss the situation,” and added that Iran had also “strongly condemned” the attack, which Russian media claim killed five people.

“First of all, Russia will require an urgent convocation of the UN Security Council, which can be viewed as an act of US aggression against the UN state,” Ozerov said, according to RIA Novosti, a Russian publication.

RIA Novosti also reported that Andrey Krasnov, first deputy chair of the Russian State Duma’s Defense Committee, said “the US strikes on the Syrian airbase are ‘reckless and irresponsible actions’ that risk further destabilizing the situation in the Middle East and lead to the emergence of new military conflicts and the expansion of those that already exist.”

“The United States wants to stir up a big fire in the Middle East and by launching 59 cruise tactical missiles they added fuel to the flame,” he said, according to RIA Novosti.

The intensity of the Russian response raises concerns about whether the Syrian action could ignite a chain of events that escalates conflict between the U.S. and Russia (with some on Twitter even evoking the term “World War 3,”) at a time when Trump has been under fire for alleged links to the Russian regime. It was a stunning turn around for a president who’s been hammered repeatedly in the media over questions about whether he’s too cozy with the Russians.

The Americans have not minced words, either. In a strongly worded statement of his own, U.S. Secretary of State Rex Tillerson accused Russia of being either “complicit” or “incompetent” in stopping Syrian chemical weapons, as the rhetoric between the Trump administration and Russia heated up. You can read Tillerson’s full statement here:

Trump ordered the launching of 59 American cruise missiles on April 6, targeting the airfield that he says Syria used to stage a chemical weapons attack that killed men, women, and children.

Russian President Vladimir Putin spoke of Syria several hours before the Trump attack, supporting Syrian President Assad, and the Russian official who warned of “negative consequences” to America a few minutes before the bombing compared the situation to Libya as well as Iraq.

Russian #UN ambassador warns the US that there could be "negative consequences" if Washington takes military action against Syria. #Syria

According to ABC, “Vladimir Safronkov, Russia’s deputy representative to the United Nations told reporters in New York that Russia was receiving signals of an attack being prepared and warned that people were not asking about possible consequences.”

Reuters reports that Safronkov warned of “‘negative consequences’ if the United States carries out military strikes on Syria over a deadly toxic gas attack.”

ABC News reports that Russia has ground troops in Syria and was warned in advance of the attack.

“A U.S. official said that Russia, which has troops on the ground in Syria, was notified of the airstrikes in advance,” ABC reported. 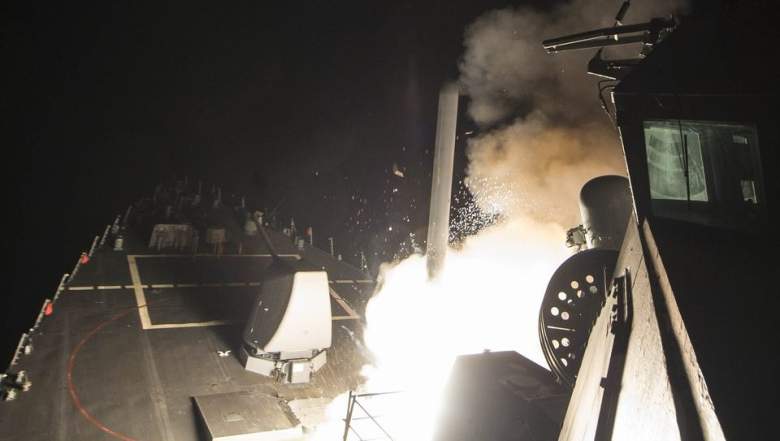 A photo of the American missiles being launched. (Twitter)

Some of the debate over Trump’s actions centered around a perception among Russia supporters that the Syrian regime – however odious – may be deterring terrorism. “Russian cruise missiles continue to hit terrorists, and American cruise missile continue to strike government forces that are actually leading the war against the terrorists, and I’m afraid that with such an approach, the idea of a Russian-American anti-terrorist coalition in Syria, about which so much has been said since Trump came into power, will die in childbirth,” RT quoted Konstantin Kosachev, “head of the Upper House Committee for International Relations,” as saying.

There were already reports that ISIS was taking advantage of the weakened Syrian government’s situation and “capitalizing on the U.S. missile strikes.”

To be clear: Trump has launched missiles on a secular gov't which protects Christians and minorities & defends its people against terrorism.

Russian Prime Minister Dmitry Medvedev said on Facebook that the airstrike “was on the brink of military clashes with Russia.” He wrote: “Instead of their much-publicized thesis about a joint fight with a common enemy, Islamic State [IS, formerly ISIS/ISIL], the Trump administration has proven that it will fiercely fight against the legal government of Syria.”

However, Trump explained his bombing of the Syrian airfield on April 6 by saying that Assad “choked out the lives of helpless men, women, and children” with a chemical weapons attack a few days before the airfield missile attack. The American president had the support of countries ranging from the UK to Saudi Arabia for the action.

Graphic imagery of the poison attack have filled the news, and the images of dead children, in particular, have horrified the world. One of the most heartbreaking photos showed a father cradling his dead twins in his arms:

The victims of the Syrian chemical attack suffered a “slow and brutal death,” Trump said in a statement, adding, “No child of God should ever suffer such horror.”

Trump said he ordered a “targeted military strike” on the airfield in Syria “from where the chemical attack was launched.”

He said that the attack was in the “vital national security interest of the United States to prevent and deter the spread and use of deadly chemical weapons.”

Syria used “banned chemical weapons, violated its obligations under the Chemical Weapons Convention and ignored the urging of the UN Security Council,” said the American president.

The back-and-forth rhetoric – and American military action – has opened up a rare and public fissure between Trump and Russia at a time when the FBI is investigating some Trump campaign officials for possible collusion with Russian interference in the 2016 presidential election.

According to The Guardian, several hours before Trump bombed Syria, Putin “doubled down on his support for the Syrian government despite the release of postmortem results by Turkey that confirmed chemical weapons were used in an attack that killed at least 72 people in north Syria.”

Putin called accusations that Assad was behind the deaths “groundless accusations” and said he wanted a “detailed and unbiased investigation” into them, the Guardian reported. According to the Guardian, Russia claims that “Syrian planes were destroying chemical weapons, not deploying them,” a contention dismissed by experts. 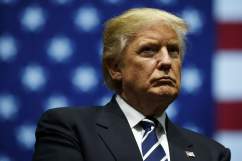