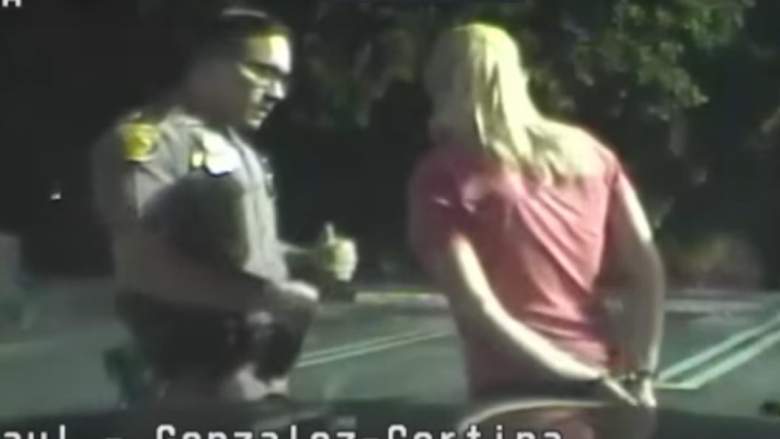 Saryna Parker is handcuffed and questioned by a police officer in Florida in March. (YouTube)

A newly-released police dashcam video shows the scene as an intoxicated former 8th grade teacher tries to kiss an officer before being arrested for drunk driving with her 10-year-old son in the car.

Saryna Parker, 43, was charged with driving under the influence, child abuse and battery on a law enforcement officer after she rear-ended a car and failed field sobriety tests performed by officers of the Florida Highway Patrol, the Miami Herald reported.

Parker, who taught science at South Dade Middle School, was terminated from her position after her arrest.

A police report says that Parker’s Cadillac hit a Chrysler van that was stopped in traffic at around 8 p.m. on March 18. The accident happened on U.S. Highway 1 and Southwest 182nd Avenue in Homestead.

In the video, Parker, who was on probation at the time, is shown stumbling over her own feet and slurring her speech. When officers tried to get her to perform field sobriety tests, Parker attempted to kiss one of them and told him that she loved him.

Dashcam: Intoxicated Teacher Tries to Kiss CopSubscribe for more: https://goo.gl/rtgS7W A teacher in Florida is out of a job over a suspicion of drunk driving and video of the traffic stop has now been released by police. A Florida State trooper responded to a report that 43-year-old Saryna Parker had crashed her vehicle into a van. The trooper says the teacher was slurring her speech and smelled of alcohol, so he gave her a field sobriety test. At one point during the test, Parker told the trooper she was going to kiss him. She also allegedly tried to kick the officer while in his patrol car. The arrest report says the teacher had her 10-year-old child in the back seat of her vehicle at the time of the incident. She was arrested and later released on bond. She faces charges of DUI, DUI with property damage, careless driving, and battery on a police officer.2017-04-24T00:34:35.000Z

The start of the video shows Parker running away from officers and screaming that she wanted to talk to her lawyer. Officers caught her and put her into handcuffs so they could detain her. That sequence sets off Parker even further, as she questions why she is being arrested in the first place and before being asked to do field sobriety tests.

While Parker performs one of the tests, she stops and appears to reach out to hug the trooper, saying “because I love you,” when asked why she was doing so.

After failing the tests and refusing a breathalyzer, she is placed into handcuffs once more and put into the back of the patrol car.

But it didn’t end there, as Parker was insubordinate in the back of the vehicle on the way to the station, the officer wrote in a criminal complaint.

As Ms. Parker sat in the back of my patrol car she violently kicked me in the groin with her right leg then continued to kick my right rear passenger side door. During this whole incident, Ms. Parker was uncooperative and very belligerent.

Read More
Crime, Viral
Saryna Parker, a former 8th grade teacher, tried to kiss a police officer and told him she loved him during a DUI arrest. Watch the police dashcam video.