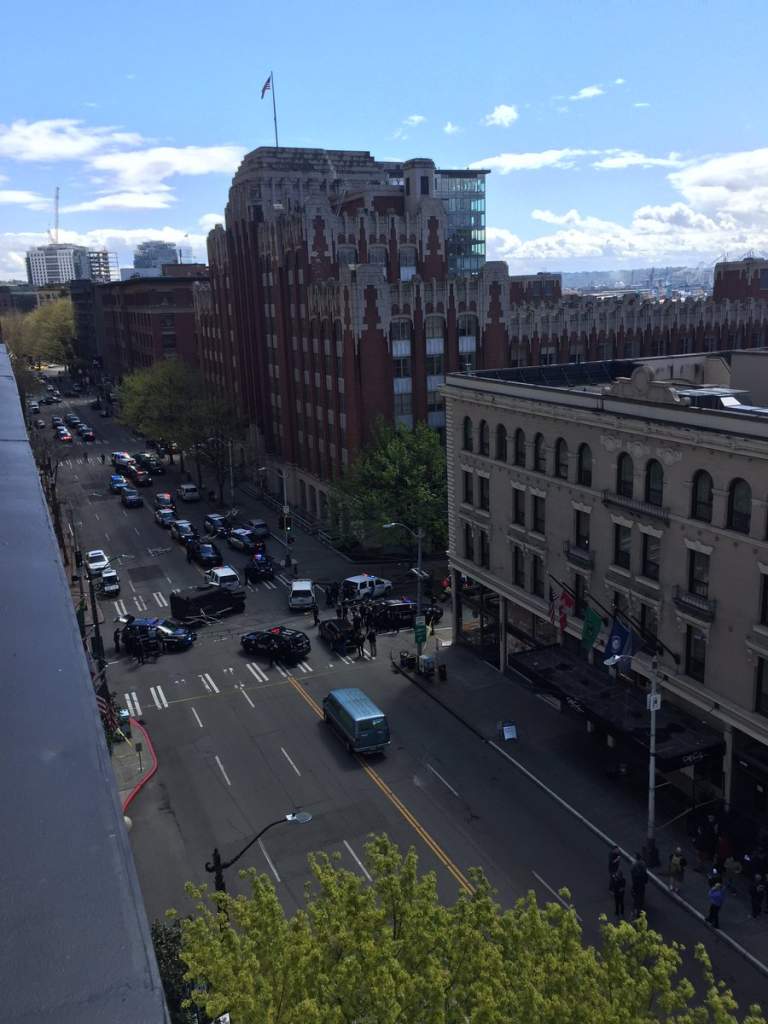 The scene outside of the Federal Building in Seattle, Washington. (Twitter)

Three Seattle Police officers were shot and injured after responding to an armed robbery Thursday near the Federal Building in Seattle, Washington.

Early reports said that two of the officers — one males and one female — suffered only minor injuries from the gunfire and are expected to survive. The third officer is listed in critical condition at an area hospital.

There are believed to be at least two suspects in the shooting, one male and one female. A source told KOMO News that the pair robbed a 7-Eleven store nearby the Federal Building before fleeing the scene. The female suspect was detained by police and the male suspect barricaded himself in a building, refusing to come out when asked.

According to police scanner traffic, an operation resulted in the male suspect being seen “down and not breathing” in the building at 5:07 p.m. Eastern. Officers sent a K-9 to retrieve the suspect’s body, who was confirmed dead by KOMO News shortly thereafter. But a Seattle Police official said at a briefing that the male suspect sustained “serious injuries,” not that he was deceased.

Police confirmed that one other suspect was detained near 1st Avenue and Madison Street. They were on the hunt for a possible third person involved in the shooting, a male whose vehicle was recovered — still running — near Beer Sheva Park, but was no longer deemed a suspect about two hours after the shooting.

Detectives have determined 3rd person initially believed to be suspect was not involved in incident. All suspects in custody.

Those near the incident reported seeing a massive police response to the scene at the building, including armored trucks and SWAT teams.

Here are a few of the chilling photos and videos from the scene:

Cops in downtown #Seattle w guns pointed at the entrance to building on corner of 1st and Madison pic.twitter.com/4gaE52Vnnn

Every cop in Seattle just tore through Pioneer Square. What is going on uptown? pic.twitter.com/38fTCxMA22

More Than 20 Police Units Were Outside the Federal Building

Just another day working next to the Federal Building pic.twitter.com/viHexdx8oA

Police Blocked Off Parts of the Downtown Area & Locked Down Building