A 32-year-old Delaware State Police trooper was shot and killed in the parking lot of a convenience store on Wednesday, police say.

Corporal Stephen J. Ballard was gunned down outside a Wawa convenience store in Bear, the state police said in a press release.

One suspect was taken into custody at the scene. Another man fled from the scene and barricaded himself inside a home in Middletown, Delaware, state police said in a press release. He was shot dead by police about 9:30 a.m. after exiting the home, according to a press release.

He has not been identified by police, but sources told The News-Journal he is 26-year-old Burgon Sealy Jr.

The shooting happened about noon outside the Wawa convenience store at 1605 Pulaski Highway.

The suspect in custody has not been named.

1. The Trooper Was Investigating a Suspicious Vehicle in the Wawa Parking Lot When He Was Shot

Based on what a witness told me, the SUV with no police lights on was the one the trooper was driving. pic.twitter.com/r46kap1rn0

McQueen said the trooper “made contact with the occupants and shortly thereafter, a struggle ensued. It was at this time that one of the two suspects exited the vehicle and proceeded to fire several rounds, striking the trooper.”

One suspect was taken into custody by responding troopers “without incident,” McQueen said.

According to police, Burgon Sealy Jr. was in a red Dodge Charger with another person in the parking lot and Ballard believed it was suspicious for a reason that hasn’t been made public. The trooper talked to the driver and then talked to Sealy, who said he had come to the Wawa lot in a gray Honda Accord.

Ballard asked Sealy to get out of the Charger, and that is when the struggle occurred, police said. Sealy fired at Ballard with a handgun he had in his waistband, according to police. Ballard tried to find cover behind a parked car, and Sealy followed him and shot him in the upper body, police said.

Sealy then approached Ballard as he was on the ground and fired multiple shots at close range, striking Ballard again in the upper body, before fleeing on foot, according to police.

A witness told The News Journal he was at a red light near the convenience store when the shooting occurred. Clarence Travers told the newspaper he heard gunfire and saw a police officer in a blue uniform fall to the ground.

Travers told The News Journal he then saw a man get out of his vehicle, walk around the car and shoot the officer on the ground multiple times, before running away.

Another witness told the newspaper the trooper’s SUV was parked “catty-corner to another vehicle, as if he quickly stopped and approached it.”

Kevin Lerner, who works at a barber shop next to the Wawa, told WPVI-TV he saw the shooting.

“When he pushed the officer he got a little room to run. So he pushed him and ran, and when he ran he ran for like seven or eight feet,” Lerner told the news station. “And then he turned around and started shooting. Just instantly started shooting.”

Witnesses said the suspect stood over Ballard and shot him “execution style,” the news station reports. 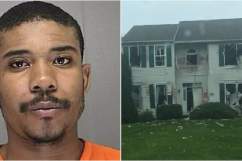 2. He Was Rushed to a Local Hospital After Bystanders Performed CPR at the Scene

HAPPENING NOW- More Delaware State Police arriving at Christiana Hospital after one of their own was shot outside a Wawa. @CBSPhilly pic.twitter.com/MmkqbM3k8v

Corporal Stephen J. Ballard was rushed to Christiana Hospital, The News Journal reports. His condition was not immediately available.

A witness said people started CPR on the trooper before emergency responders arrived. Monica Moore told The News Journal she heard the gunshots and then saw the trooper on the ground face down. She said bystanders quickly rushed to begin CPR.

“I saw him and just wanted to help,” Moore said.

Delaware Governor John Carney has ordered flags to be flown at half-staff in Ballard’s memory.

“One of our sworn troopers has lost his life performing a duty on behalf of the people of Delaware,” Carney said in a statement. “My heart is with our fallen Delaware State Trooper’s family and the officers who have served beside him. Delaware’s law enforcement officers go to work every day knowing they put their lives on the line to protect ours. We are incredibly indebted to their bravery and service.”

Corporal Stephen Ballard served for more than eight years in the Delaware State Police, according to a press release.

He graduated from the academy in 2009, the Dover Post reported at the time. He was part of the 80th Delaware State Police recruit class.

Ballard was assigned to Troop 2 in Glasgow, state police said.

Condolences poured in on the state police Facebook page, including one from a Delaware resident who remembered Ballard fondly.

“Years ago my grandfather died. It wasn’t suspicious, but I guess the Local police couldn’t handle it. The state police showed up and it happened to be Cpl. Ballard,” Michael Beil wrote. He joked with my brother,myself and my dad. He made light of a terrible situation and made us laugh and forget what was really going on. I will never forget that. God bless his family and may he be in my family’s prayers.”

4. He Was a Delaware State Graduate Who Was Married Last Year & Was a Father, His Family Says

Ballard graduated from Delaware State University in 2007 and was a Bowie, Maryland, native, according to his Facebook page.

He was married in January 2016, according to a photo he posted to Facebook.

A family member said Ballard was a “husband a son a father and a loving loving person always smiling,” adding he will be “truly missed.”

A college friend said in a Facebook tribute Ballard was “an awesome man of God, Husband, Son, Father, Colleague, and Friend and I am blessed that I knew you!”

The suspect in Ballard’s death, Burgon Sealy Jr., also attended Delaware State University, the same school that Corporal Stephen Ballard graduated from, a source told Heavy. It is not known if they two men had met prior to the shooting on Wednesday. Details about when Sealy, 26, attended the school and if he graduated were not immediately available.

5. The Gunman Fled From the Scene & Barricaded Himself Inside a Home, Where He Fired More Shots at Officers, Police Say

aSearch underway for suspect at the Brickmill Farms neighborhood of Middletown. Chopper 6 above. pic.twitter.com/97V1rgB36L

The gunman barricaded himself inside a home in the Brick Mill Farm Development in Middletown, according to a Delaware State Police press release. The development is located in the 500 block of St. Michaels Drive.

The home is owned by Burgon Sealy Jr.’s father, The News Journal reports.

Investigators tracked Sealy to the home and he fired at them. Police from several agencies then surrounded him and shut down the neighborhood.

“Multiple Special Operations Response Teams and Conflict Management Teams from allied police agencies continued to make contact with the male subject and attempted to persuade him to surrender,” state police said in a statement. “At 9:17 a.m., the male suspect exited the residence and engaged police. The suspect was then shot by law enforcement. He was pronounced dead at the scene at 9:29 a.m.”

Police said they used explosive devices during the standoff, but did not enter the home, according to a press release:

At 8:22 p.m., the Explosives Ordinance Disposal Unit (EOD) utilized an explosive breeching charge on the front door. At this time, no entry has been made into the residence. Multiple Special Operations Response Teams and Conflict Management Teams from allied police agencies are attempting to make contact with the male subject and are continuing to attempt to persuade him to surrender.

Neighbors told Fox 29’s Steve Keeley that they heard several booms throughout the night. The explosives blew out the front door and every window of the home, Keeley reports.

During gunfights overnight police in Delaware appear to have blown apart every window&door of wanted trooper killer's home @FOX29philly pic.twitter.com/VJ9MEBlQEr

The neighbor told Keeley the first bang woke him up about 1:45 a.m., followed by two more “loud booms” at 1:45 a.m., and then more explosions at 2:40 a.m., with smoke visible after that blast. A sixth loud boom was heard just before 3 a.m. The explosions continued through the morning, while police lit up the house with a spotlight and used a bullhorn to communicate with Sealy.

Neighbor just told me the explosions at house "now are non stop here, it's insane" as it seems police trying to get gunman out @FOX29philly

Sealy Jr.’s only prior criminal record appears to be a 2013 arrest in Volusia County, Florida, on felony charges of carrying a concealed weapon and misdemeanor possession of not more than 20 grams of marijuana, according to online court records.

Sealy pleaded no contest to misdemeanor charges and received 12 months probation in exchange for his adjudication being withheld. His probation was completed successfully in July 2014.

He was living in Daytona Beach, Florida, at the time, but the second half of his supervision was transferred to Delaware, allowing him to move back home.

Other details about that case were not immediately available.

A heavy police presence was seen in the area, and residents were warned to stay inside.

Several streets in the neighborhood were closed, Delaware State Police said in a press release.

Police said, “Residents in the area are advised to stay inside their homes and lock their doors until notified otherwise.”

The neighborhood was closed down for several hours. A nearby fire station was opened as a shelter.