Police in Baltimore say they have no reason to believe that accused Cleveland Facebook killer Steve Stephens is in that city.

That’s despite a social media threat directed at Baltimore on Instagram.

Baltimore, Maryland police said in a statement that they were “aware of the numerous social media posts reportedly indicating that Cleveland murder suspect Steve Stephens is in the Baltimore area. The reports of his sightings are unfounded.”

Major cities “in the eastern portion of the country have experienced similar reports,” noted Baltimore police. “We are involved in information sharing with local agencies and we are in direct communication with authorities investigating this case.”

Someone made a fake page from Stephens threatening Baltimore. That may be what stepped up a flurry of concern that the accused killer might have headed for Maryland:

Whatever stupid idiot made this fanpage of Steve Stephens, you're not funny and you're a heartless fool#Cleveland#SteveStephens#Baltimore pic.twitter.com/k9SkLCONsA

Baltimore police urged people to remain vigilant at all times but said they have “no indications that the Cleveland murder suspect is in or headed to the Baltimore area.”

Stephens has been the subject of a massive multi-state manhunt since he posted a Facebook video that allegedly shows him murdering 74-year-old Robert Godwin Sr., a stranger accosted on the street. The motive: Stephens is accused of slaying Godwin because he was angry at his own girlfriend, Joy Lane. In the video, the man police say is Stephens demands that Godwin say Lane’s name and asks his age before callously shooting and killing him. Stephens then vanished.

Since that day – Saturday, April 15, there have been sightings of Stephens in other cities, including Philadelphia, and Virginia authorities also debunked rumors Stephens was in that state after a similar fake Facebook threat to the one in Baltimore.

However, there has been no verified sighting of Stephens, and authorities admit they aren’t sure where he is; he’s believed to be armed and dangerous. On Twitter, people are expressing shock that Stephens could evade capture for so long.

You can read more about Stephens’ sightings here: 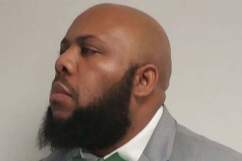