The man accused of being the “Facebook killer” had a valid concealed carry gun permit, Cleveland police said.

According to The Daily Beast, Police Chief Calvin Williams said “guns were seized from a home in the city of Twinsburg, a suburb of Cleveland, that is listed in court records as the home occupied by Stephens and his girlfriend at the time, Joy Lane.”

The chief didn’t release how many guns were seized or who they were registered to, the Daily Beast reports.

Stephens is accused of murdering 74-year-old Robert Godwin Sr., a total stranger he confronted on the street. A video police say is of Stephens then shows him shooting Godwin after asking the man’s age and demanding he say Lane’s name. He then disappeared, and authorities are conducting a multi-state manhunt for the behavioral therapist. There is a $50,000 reward for Stephens’ capture, and, despite unconfirmed sightings in Philadelphia, police say that Stephens could be anywhere. He had alleged on video posted to Facebook that he had killed other people in an Easter Sunday massacre, but police have yet to find additional victims.

Stephens had also posted videos to Facebook showing him firing guns. According to Cleveland.com, “Sherwin Shooting Sports owner Blake Frederick said that Steve Stephens had shot on the gun range within the last six months.”

You can watch videos of Stephens shooting guns here: 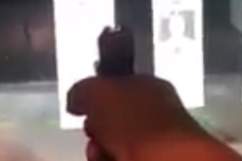