Police in Philadelphia were briefly searching for Steve ‘Stevie Steve’ Stephens, the Cleveland man who posted a video Sunday that appears to show him killing 74-year-old Rrobert Godwin Sr., after witnesses reported seeing him at Fairmount Park. However, Philadelphia police later said it was a false alarm.

“At this time, there is no indication that the subject is at that location, or anywhere in the city of Philadelphia,” a statement from police read.

As a precaution though, eight elementary schools in West Philadelphia and one high school were on lockdown, Philly.com reports.

Police told WPVI that witnesses reported seeing Stephens at Fairmount Park, but the reported sightings were confirmed. Police said that there are no indications that Stephens is there.

NBC10 reports that Philadelphia Police said that, as of 1:30 p.m. ET, there was “no indication that that subject is in the (Belmont) Plateau area.” They said they started receiving 911 calls about a possible sighting of Stephens around 12:30 p.m. ET. However, a source told WTFX that all the reports of Stephens being in the area came via social media. WTFX also reported that police were searching the zoo area.

Pennsylvania is one of the five states police have said Stephens may be. The others are Ohio, New York, Indiana and Michigan.

“He could be nearby. He could be far away or anywhere in between,” Stephen Anthony, the lead FBI agent in Cleveland, said on Monday.

Cleveland Police have told the public that Stephens is likely driving a white Ford Fusion with a temporary Ohio tag, with the number E363630. Police say that he is still armed and dangerous. It takes around seven hours to drive from Cleveland to Philadelphia.

In a Facebook video posted on Sunday, police say Stephens is seen shooting and killing Godwin, a man Stephens chose at random. In the horrific video, Stephens asked Godwin to say the name of Joy Lane, his estranged girlfriend. In other videos, Stephens claimed he killed other people, but police say they have only been able to confirm one victim.

During a press conference, Cleveland Police Chief Calvin D. Williams and Mayor Frank Jackson announced a $50,000 reward for information that will lead to Stephens’ capture. 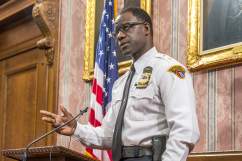 Read More
cleveland, News, Philadelphia
Philadelphia Police confirmed that they searched for 'Facebook Killer' Steve Stephens, but there's no indication that he was at Fairount Park.