An American Airlines passenger came to the aid of a mother who was left crying with her baby in her arms after other passengers say a flight attendant “violently” took a stroller from her, nearly hurting the child.

The passenger, identified by WFAA-TV as Tony Fierro, was then confronted by the flight attendant, who told Fierro to stay out of the incident and then taunted him, telling Fierro to “hit” him multiple times.

A video of the confrontation, which does not show the alleged stroller incident, was was posted to Facebook on Friday by Surain Adyanthaya, who was among passengers boarding Flight 591 from San Francisco to Dallas-Fort Worth. You can watch it above.

American Airlines has already released a statement about the incident, posting it to the “Crisis Alert” section of its press release page.

“We have seen the video and have already started an investigation to obtain the facts,” the statement said. “What we see on this video does not reflect our values or how we care for our customers.”

1. Fierro Can Be Heard Saying ‘I’m Not Going to Just Sit Here & Watch This’

The 2:39 video begins with the woman, who is from Argentina, already crying at the front of the plane while holding her baby in her arms and talking to the captain and a female flight attendant. She is hard to understand, but appears to ask the American Airlines employers to give her back her stroller.

A male passenger, identified by WFAA-TV as Tony Fierro, of Dallas, can then be heard saying, “hey sir,” and then telling someone next to him, “no, I’m not going to just sit here and watch this” while the woman continues to cry at the front of the plane.

Fierro then goes up to ask for the name of the “guy” who “did that with the stroller.” He says, “I want to know his name personally,” before returning to his seat.

The woman was crying at the front of the plane when the video began.
(Facebook/Surain Adyanthaya)

Passengers continue to come onto the plane, including one woman who speaks to the American Airlines employees about what she saw.

A male flight attendant, who has not yet been identified, comes onto the plane and someone says, “there he is.” As he talks to his co-workers, Fierro intervenes, saying, “Hey bud, hey bud. You do that to me and I’ll knock you flat.”

The flight attendant turns to him and puts his finger in Fierro’s face, pointing and saying “you stay out of this.”

Fierro leaves his seat again to confront the flight attendant, who puts his arms out, seeming to taunt the passenger.

“Hit me,” the flight attendant then tells Fierro repeatedly, as he is pulled back by the American Airlines captain. He then says, “bring it on,” while again taunting the passenger.

The video ends with the enraged flight attendant telling Fierro to “be quiet,” and Fierro responding, “maybe you’ll get videotaped too and be all over the news.”

2. American Airlines Says the Passenger Is Receiving ‘Special Care’ & the Flight Attendant Has Been Removed From Duty

The flight attendant pointed at the passenger and told him to “stay out of it.” (Facebook/Surain Adyanthaya)

Surain Adyanthaya said on Facebook that the woman was removed from the flight with her baby and the flight attendant returned.

“They just in-voluntarily escorted the mother and her kids off the flight and let the flight attendant back on, who tried to fight other passengers,” he wrote. “The mom asked for an apology and the AA official declined.”

The flight, which was set to depart San Francisco at 2:18 p.m., left 1 hour and 17 minutes late and arrived in Dallas at 7:44 p.m. local time, according to Flight Aware.

We are deeply sorry for the pain we have caused this passenger and her family and to any other customers affected by the incident. We are making sure all of her family’s needs are being met while she is in our care. After electing to take another flight, we are taking special care of her and her family and upgrading them to first class for the remainder of their international trip.

The actions of our team member captured here do not appear to reflect patience or empathy, two values necessary for customer care. In short, we are disappointed by these actions. The American team member has been removed from duty while we immediately investigate this incident.

The woman was traveling with her family back to Argentina, WFAA reports. She was on the flight with her two children.

Fierro was able to continue on to Dallas, and the flight attendant also remained on the flight, passengers said.

The video comes amid heightened attention on airlines treatment of passengers after a video went viral around the world showing a passenger, David Dao, being dragged off a United flight in Chicago because the airline needed to give his seat to a crew member.

Dao was hospitalized with a concussion, broken nose and lost two front teeth in the incident, his attorney said.

United eventually apologized for that incident, which remains under investigation, and Dao is expected to file a lawsuit.

3. Fierro Says the He Was ‘Fired Up’ Because a Baby Almost Got Hurt

Tony Fierro told WFAA-TV he saw what happened between the mother and the flight attendant and was upset by it.

“A baby almost got hurt. That’s what just fired me up,” he told the news station. “So that was it. I don’t want to make a big deal out of it.”

Surain Adyanthaya, who filmed the incident, told WFAA the flight attendant seemed angry when he grabbed the stroller from the woman as she was trying to put it into an overhead compartment.

“He was very upset,” Adyanthaya told the news station. “He grabbed it and just pulled it off, sort of violently yanked it. and then stormed off the plane with it.”

Olivia Morgan, another passenger who was waiting to board the flight with her 8-year-old daughter when the incident occurred. She told KTLA-TV the flight attendant was “violent” and almost hit the woman’s baby with the metal stroller.

“The flight attendant wrestled the stroller away from the woman, who was sobbing, holding one baby with the second baby in a car seat on the ground next to her,” she told KTLA.

Morgan, the vice president of Common Sense Media and the wife of former Obama campaign manager David Plouffe, said the flight attendant also snapped at her.

“He stormed by me with the stroller and I said something like, ‘What are you doing? You almost hit that baby!’ And he yelled at me to ‘stay out of it!’ just like he does in the video,” she told the news station. Morgan said the woman told had talked to a female flight attendant who said she could put the stroller in the overhead area, if there was space.

“She was looking for space when the male attendant tried to take it away from her… and she said she told him the other attendant had told her it was okay to look,” Morgan told the news station.

Another passenger, Tom Watson, gave his version of what happened to KTLA also.

“The lady and her two children were seated near the back of the plane. She was somehow able to get her stroller on board and back near her seat,” he said, adding that the flight attendant told the woman she couldn’t put the stroller in the bin. “She refused to let him take it and she was almost to the point of shouting.”

Watson told the news station the male flight attendant seen in the video called for security personnel, which “escalated” the situation.

4. He Is a University of North Texas Graduate Who Works as the President of an Insurance Company

Tony Fierro, a 42-year-old father and husband, is the president of K&S Insurance, which is based in Rockwall, Texas, according to its website.

He graduated from the University of North Texas in 1997, according to his Linkedin profile. He then worked for two years as a financial analyst at Raytheon Missile Systems before joining L&S.

He is also active at the University of North Texas, as a member of the advisory council for its Finance, Insurance, Real Estate and Law department and the Dean’s Advisory Board, according to the K&S website.

5. Fierro Is Also a Deacon at His Church & the Board Member of a Charity Working to Provide Clean Water in Liberia

Fierro is also a deacon and a founding member of his church, Crosspoint Community Church, in Rockwall, according to his company’s website.

He is involved in several charities, including as a board member for The Last Well, a project that is striving to bring clean water to Liberia.

Fierro and his wife also sponsor a scholarship for incoming students at his alma mater, the University of North Texas. 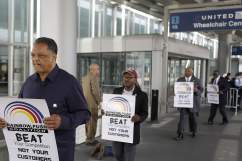 Loading more stories
wpDiscuz
51
0
Would love your thoughts, please comment.x
()
x
| Reply
Tony Fierro, of Dallas, is the American Airlines passenger who stood up to a flight attendant accused of "violently" taking a stroller from a woman with a baby.