United Airlines is taking a beating on social media following a disturbing video showing an Asian doctor named Dao being violently removed from a plane from Chicago to Louisville before takeoff at O’Hare International Airport. Dao is a doctor, father of five and a grandfather. Four of his five children are doctors and his wife, Teresa, is a pediatrician. He is a native of Saigon, Vietnam, but lives in Elizabethtown, Kentucky.

Dao’s ethnicity has sparked speculation across the Asian world, particularly China, that it may have been a contributing factor to his removal from United Airlines flight 3411. According to the Washington Post, it was originally rumored that Dao was Chinese, not Vietnamese. The rumor spread like wildfire across Chinese social media and may have grave repercussions for United’s bottom line. United often bills itself as the top American carrier to China and vice versa.

But it seems the repercussions are also taking place in the United States as Reddit shares video after video of United PR fiascos. Scroll down to watch some of the worst.

From the YouTube description: “Donna Beegle claims she and her special needs teenage daughter were mistreated, which the airline denies.”

From the YouTube description: “United airlines customer service!!!! We were delayed because of maintenance issues. But the system says it was flight control issues so they’re not putting us up in a hotel. This woman just voiced her opinion about the bad service by doing so she was about to lose her flights. The tone changed as soon as they saw me. Customer service is terrible at United and this individual named Otto N. was very rude and has no idea what customer service means. Please share.”

A man traveling internationally is put through the ringer by United.

All these videos currently have thousands of upvotes on Reddit within the last day since the news broke about Dao. Following the initial public outcry, a United spokesperson said about the video, “Flight 3411 from Chicago to Louisville was overbooked… After our team looked for volunteers, one customer refused to leave the aircraft voluntarily and law enforcement was asked to come to the gate. We apologize for the overbook situation. Further details on the removed customer should be directed to authorities.” According to the Courier-Journal, the airline wanted the paying passengers to give up their seats for United employees who had to be in Louisville for a flight on Monday.

As the story gained more traction, Oscar Munoz, CEO of United Airlines, stepped up to make a comment. “This is an upsetting event to all of us here at United… I apologize for having to re-accommodate these customers. Our team is moving with a sense of urgency to work with the authorities and conduct our own detailed review of what happened. We are also reaching out to this passenger to talk directly to him and further address and resolve this situation.” However, his apology was not perceived as sincere by most people, who took particular issue of his use of the word “re-accommodate.” 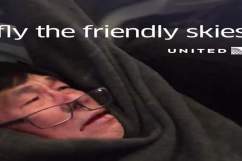 United Airlines Forcibly Removes Passenger From Flight: All the Memes You Need to See