A passenger is forcibly removed from a United Airlines flight. (Twitter)

Videos showing officials forcibly removing a man from a United Airlines flight April 9 caused a stir because of the graphic nature in which he was taken off.

The removal was caught on video by numerous passengers aboard plane and shows three security officers speaking with a man before yanking him into an aisle and dragging him off of the plane amidst screams from other passengers.

Watch a video of two separate angles of the incident caught by two passengers below.

The clip shows the three officers speaking with the man — later identified as David Dao — when suddenly one of them grabs him by the arm. Dao out a loud scream and before being pulled into the aisle by a security officer. The passenger’s body appears to go limp and the video shows what appears to be blood coming out of his mouth.

The United flight was bound for Louisville out of O’Hare International Airport in Chicago. The reason the passenger was removed was because flight 3411 was overbooked, United said in a statement released Monday. It added that the passenger “refused” to get off of the plane after being asked to voluntarily do so.

However, it later clarified that the flight was in fact not overbooked.

United spokesman Jonathan Guerin told USA Today that all of the 70 seats on the plane were filled, but that didn’t make it over capacity.

Instead, a regional affiliate that was operating the flight — Republic Airlines — opted to move four of its passengers because four crew members were considered “must-ride passengers.”

Attorney Stephen L. Golan of Golan Christie Taglia released a statement on behalf of the Dao family. It said that his client remained hospitalized for his injuries in Chicago as of April 11. The family is “appreciative” of the support they have received since the incident occurred April 9.

JUST IN: Lawyer for United passenger Dr. David Dao, who was dragged off a flight, just released this statement. https://t.co/BWTb09TfGn pic.twitter.com/34qw4SQV2K

United CEO Oscar Munoz also released a statement Monday saying that the incident is “upsetting.” He added that the airline will investigate and review the incident.

The Chicago Department of Aviation said in a statement that the incident on board the plane “was not in accordance” with the standards of the group. The officer who removed Dao from the plane has been placed on leave, it said in its statement.

BREAKING: One of the officers who removed the passenger from United flight has been placed on leave effective today. pic.twitter.com/N5JZIdo4IQ

According to the Louisville Courier-Journal, passengers at the gate before the flight were told that it was overbooked. United offered a $400 credit and a hotel stay if passengers would re-book and fly to Louisville on Monday afternoon. Crews allowed the plane to be boarded until it was at capacity. A United staff member reportedly got onto the plane and told passengers that four people had to give their seats up to United employees that required to be in Louisville on Monday. Nobody volunteered to do it, so staff randomly selected passengers. The first two were a couple, who got off the plan without incident. The next was Dao, who said he would be unable to get off the plane because of a commitment in Louisville in the morning, reports say.

@united @FoxNews @CNN not a good way to treat a Doctor trying to get to work because they overbooked pic.twitter.com/sj9oHk94Ik

According to Twitter user JayseDavid, Dao, who is a physician from Ketucky, had his face “slammed” against an arm rest, which caused the blood to flow from his mouth. He added that it appeared as if Dao was “knocked out” because his body suddenly went limp.

After about 10 minutes, Dao ran back onto the plane looking disoriented with his face bloodied. Passengers say he clung to an object in the back of the plane, screaming “I need to go home” before he was removed once again.

The flight was delayed around two hours before it finally took off for Louisville.

Read more about this incident in Spanish at AhoraMismo.com: 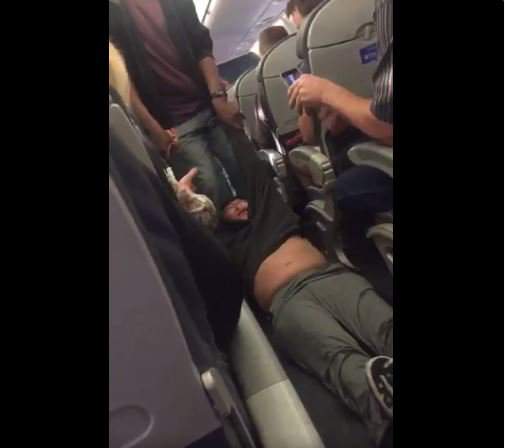 Loading more stories
wpDiscuz
13
0
Would love your thoughts, please comment.x
()
x
| Reply
Due to the flight being overbooked, United Airlines had a passenger on a plane forcibly removed from the flight. Watch a video of the incident.