Starbucks customers have varying opinions about the limited edition Unicorn Frappuccino released on April 19 (a drink which the Starbucks website describes as “The flavor-changing, color-changing, totally not-made-up Unicorn Frappuccino. Magical flavors start off sweet and fruity transforming to pleasantly sour. Swirl it to reveal a color-changing spectacle of purple and pink. It’s finished with whipped cream-sprinkled pink and blue fairy powders) — some customers love it, others hate it. But the baristas expected to produce and sell the drinks consider the sugary concoction a source of stress.

Starbucks barista Braden Burson posted a rant (since removed) to his Twitter feed begging customers: “The new Unicorn Frappuccino came out today. And for most of you who don’t know, the Unicorn Frappuccino is a mango-based cream Frappuccino, no coffee, and basically has sour stuff in the middle. Tastes like a Sweet-Tart. … because it’s been so popular online, everyone was like ‘Oh my gosh, I need to try it when it comes out.’ Well, today it came out. And I have to tell you: PLEASE don’t get it! I have never made so many Frappuccinos in my entire life. My hands are completely sticky. I have unicorn crap all in my hair and on my nose; I have never been so stressed out in my entire life. It has been INSANE. If you love us as baristas, DON’T ORDER IT!”

Burson later told the Associated Press that he did not mean to “downgrade” the drink, saying “It’s a great drink. But it is difficult to make when there are like 20 fraps all at once.” Meanwhile, Starbucks released a statement saying that the company will be reaching out to Burson “to talk about his experience and how to make it better.”

Willamette Week said the limited-edition drink “tastes like Trix cereal served in a cup of Go-Gurt,” and also quoted an unnamed barista who complained about how aggravating it is to make the drink, a seven-step process which includes circling “the inside of the cup once around the top with the Sour Blue Drizzle Premix …. so many steps and ingredients …. everyone was like ‘I’m putting in my two weeks.'”

How to properly drink a Starbucks unicorn frappuccino. pic.twitter.com/7tU97QP2us

The Federalist was even less polite, announcing “I tried Starbucks’ Unicorn Frappuccino and it was an abomination … tastes like they blended blue raspberry Baby Bottle Pop and children’s medicine.”

But at least some Twitterers — who may or may not have actually tried the drink in question — had complimentary memes to post about the concoction:

Me: Score a touchdown and I'll buy you a unicorn frappuccino 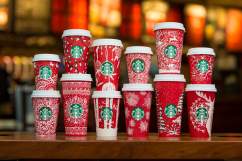 Loading more stories
wpDiscuz
6
0
Would love your thoughts, please comment.x
()
x
| Reply
While some (not all) customers seem to like the limited edition Starbucks Unicorn Frappuccino, the baristas who actually have to make the drink are less complimentary.