On Wednesday, April 12, police in DeKalb County, Georgia (just outside of Atlanta) released a security video showing an armed robber who fired his gun twice while robbing two men in the parking lot of a Texaco gas station. The robber stole the two men’s personal belongings, and forced one to strip down to his underwear.

The Atlanta Journal-Constitution reports that the two victims were at the gas station waiting for a ride. A caption at the beginning of the video says that the robbery happened at “2220 hours” (10:20 p.m.) on April 11. The video shows a man in a black Nike shirt walking across a gas station parking lot to two other men who stood with their backs facing the camera. The Nike-shirt man started robbing the other two, and fired his gun for the first time around the video’s 49-second mark, visible as a flash of bright white light. The bullet did not strike either of the two robbery victims. After gathering up the victims’ discarded belongings and clothes, the suspect fired his weapon again at the 1:49 mark.

The scene then switches to video footage taken from inside the store about a minute later (according to the time stamps in the upper right-hand corner); the suspect in the black Nike shirt walked into the store empty-handed, said a few words and then walked back out.

The day after releasing this video, police identified the suspect as 25-year-old Santavious Hurley. The Atlanta Journal-Constitution reports that police allege Hurley was shot during another attempted robbery on Wednesday night, and taken to the detention wing of Grady Memorial Hospital in Atlanta. 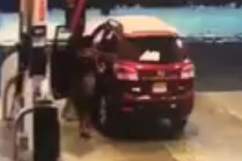 Read More
Breaking News, Crime
wpDiscuz
4
0
Would love your thoughts, please comment.x
()
x
| Reply
An armed robber in DeKalb County, Georgia, robbed two men in a Texaco gas station parking lot, and even forced one man to remove his clothes. He was shot during another alleged robbery the next night.