VIDEO of an explosion in #Boston that sent a manhole cover flying. It landed on the sidewalk. Story tonight @7News. pic.twitter.com/qTQ8ObvhRO

A series of manhole fires in Boston on April 2 caused at least one explosion, which in turn caused a manhole cover to fly through the air. No injuries have been reported. WCVB reports that the fires broke out near Government Center, in the area of Cambridge and New Sudbury Streets. Residential energy provider Eversource cut off power to the area, and said that crews are assessing the damage; for now, it’s believed the fires were caused by a failure in an underground cable.

The video below shows a fire truck on the scene, watching smoke billow out of the manhole mere seconds before the explosion. 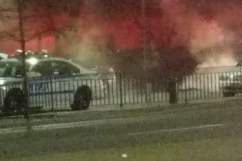 Read More
Breaking News
An underground fire led to at least one explosion which sent a manhole cover flying through the air in Boston on April 2.