#BREAKING: Warehouse burning in area of NW 128th Street and 22nd Ave in Opa-Locka. Smoke seen for miles (vid is from @FrManny in Hialeah) pic.twitter.com/3GkAZjRiew

A two-alarm fire broke out at an American Fruit & Produce Corporation warehouse in Opa-Locka, Florida, around 4:30 in the afternoon, resulting in a thick plume of black smoke visible from miles away.

The Miami Herald reports that approximately 24 units from Miami-Dade Fire Rescue came out to battle the blaze. Local TV station Channel 10 says that at least a dozen tractor-trailers on the site exploded. The smoke was thick enough to force the closure of two runways at Miami Opa-Locka Executive Airport.

This brief video clip appears to be the closest on-the-ground view currently available. 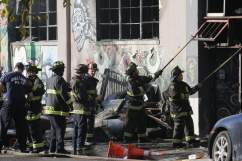 Oakland Fire Cause: What Started the Warehouse Fire?