The worlds of politics and professional wrestling once again collided on Thursday when Linda McMahon, administrator of the Small Business Administration, was asked during a Congressional hearing about John Cena and Nikki Bella’s WrestleMania engagement.

Congressman Rod Blum of Iowa was the one to ask Linda McMahon about the events of WrestleMania 33.

“I want to address the 800 pound gorilla in the room that no one has asked you so far, but I will, and some of my constituents want to know this as well,” Blum said. “Why did it take John Cena so long to propose marriage to Nikki Bella? And remember: you’re under oath.”

Linda McMahon just smiled and said, “You’ll have to ask him.”

Blum is referring to the fact that at WrestleMania 33 on Sunday, John Cena proposed to his real life girlfriend and fellow WWE wrestler Nikki Bella. Up until 2009, Linda McMahon was heavily involved in the WWE, serving as the company’s CEO for some time. She is the husband of Vince McMahon, the WWE’s chairman and CEO, and she was featured in a number of on-screen WWE storylines over the years.

Linda McMahon left the WWE in 2009 order to run for Senate as a Republican, but she lost the election to Richard Blumenthal. She and Vince McMahon are personal friends of Donald Trump, and before he was a politician, Trump frequently appeared on WWE programming. He was a major part of WrestleMania 23, in which he shaved Vince McMahon’s head in front of a crowd of 80,000 people, and he is a part of the WWE Hall of Fame.

This is not the first time this year that McMahon’s history with professional wrestling has come up during her White House job. When she was confirmed to her position at the Small Business Administration, the entire McMahon family, including Shane McMahon, Stephanie McMahon, and Triple H, took a photo with Donald Trump in the Oval Office. All three are heavily involved in the WWE today, having had major roles at WrestleMania 33 this past weekend.

Plus, during Linda McMahon’s confirmation hearing in January, Stephanie McMahon and Triple H were in attendance, and Senator Tim Scott pointed out that he’s a big fan of wrestling.

“One of the things you mentioned…certainly looking for qualified local employees, I assume you’ve had some success with local qualified employees like Triple H and The Rock and other folks,” Scott said. 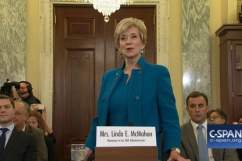