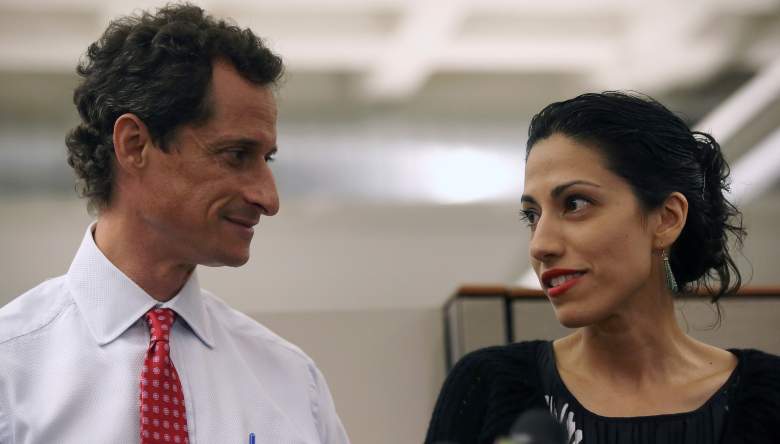 Human Abedin and Anthony Weiner during a press conference. (Getty)

The former New York Congressman who resigned in disgrace and subsequently lost a mayoral race was until last year married to Huma Abedin, a staffer of Hillary Clinton. The two separated in August 2016, and after reports that they might be trying to make things work again, The New York Daily News reported this week that Abedin has officially filed for divorce.

Here’s what you need to know about the relationship between Anthony Weiner and Huma Abedin.

1. They Met in 2001 at a Democratic National Committee Retreat 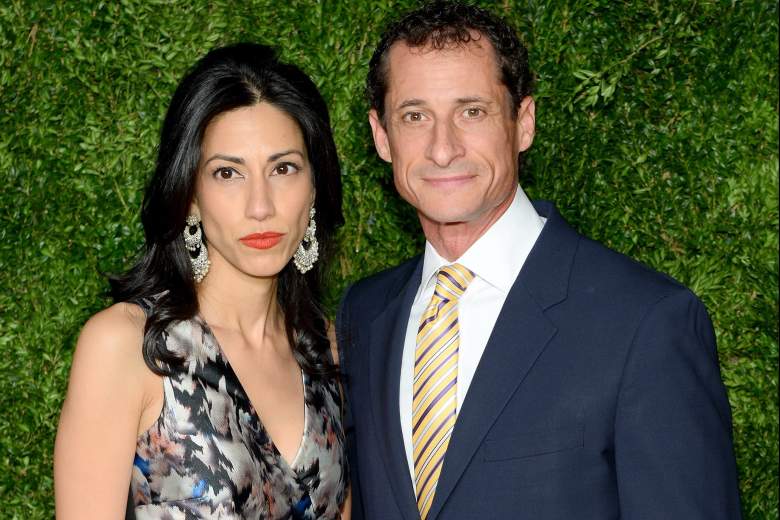 This was at Martha’s Vineyard at a Democratic National Committee retreat. Anthony Weiner had already been serving as a Congressman from New York for two years, and Huma Abedin was a senior adviser to Hillary Clinton; Clinton at the time was a New York senator.

Abedin later recalled that this first meeting wasn’t exactly romantic, as her mind was completely focused on work and she wasn’t ready to meet anyone.

“It didn’t go so well,” Abedin told Vogue. “A friend of mine came up to me and said, ‘He’d like to meet you.’ I was working. My mind wasn’t even there. He came over, he said hello, and, honestly, that was the end of it.”

Weiner invited Abedin to come get drinks with him and a group of people. Abedin agreed, but she left pretty quickly.

“Our recollection is not identical,” Abedin told Vogue. “But we both remember that I ordered tea, and then left to use the ladies’ room, and then never came back. That was our first meeting.”

Weiner has always maintained that Abedin ditched him that night, but she says she simply got caught up talking with other people and that by the time she returned to the table, Weiner was gone, according to The New York Times.

Although this was the first time they officially met, Weiner had seen Abedin several times before.

“I started seeing her around, and I was like, ‘Wow, who is that?'” Weiner told The New York Times. “And I was not the only one. It’s not like she’s this lightweight beautiful person in fancy outfits. She’s like this intriguing, fascinating creature.” 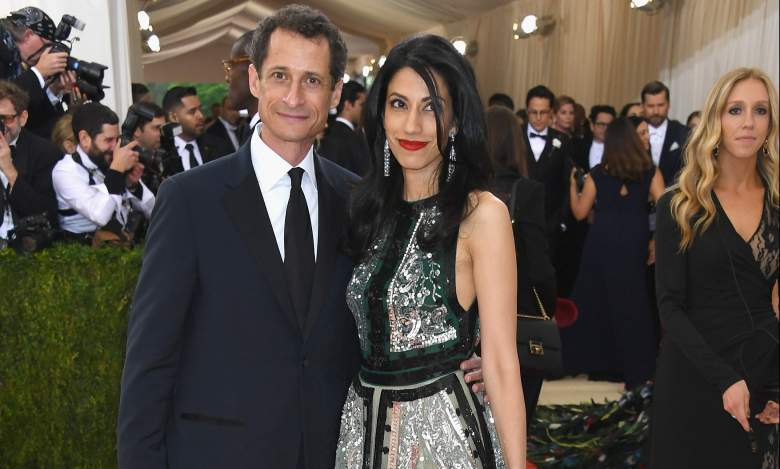 During those years, they continued to cross paths, and Abedin says that she continued to take note of how good a debater Weiner was.

“One of the things that, because we became friendly, I found striking about Anthony was how smart he was, what a great debater he was,” Abedin told Vogue. “He was smart, he was passionate. When he wanted to do something that he thought was the right thing to do, he would not give up. The kind of dedication and passion he had for helping people, I found very attractive and inspiring.”

According to The New York Times, in 2007, Weiner sat next to Hillary Clinton at a State of the Union address, serving as a buffer between Clinton and her political rival, Barack Obama. Abedin subsequently thanked Weiner for looking out for Clinton. They went out for coffee afterwards and realized how much they have in common.

“We both lived these very intense professional lives, both married to our jobs,” Abedin said, according to The New York Times. “And he got it.”

Abedin and Weiner started dating during Hillary Clinton’s 2008 campaign. There had been rumors that the two were together for a bit, but in May, Weiner told a reporter that he was on the Clinton campaign trail a lot “largely because I’m dating Huma,” according to the New York Daily News. 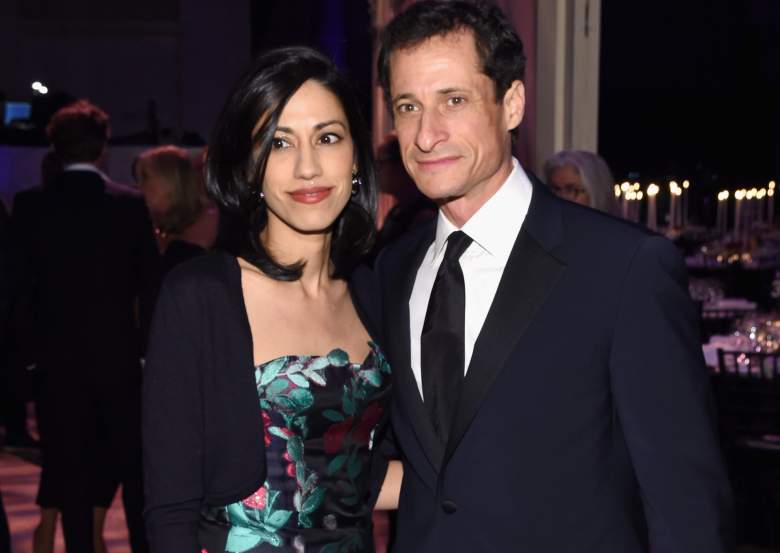 On Memorial Day 2009, Anthony Weiner proposed to Huma Abedin, according to The New York Daily News.

The wedding ended up taking place on July 11th, 2010 at Oheka Castle in Huntington, New York. It was officiated by Bill Clinton, according to The New York Times.

Bill Clinton during the wedding reportedly talked about the fact that Weiner would not give up in his pursuit of Abedin’s affection.

“He spoke of how they met and how she at first rejected him but that his determination would not let up,” a source told The New York Daily News.

In December 2011, Abedin gave birth to Jordan Zain Weiner. This came six months after Anthony Weiner resigned in disgrace from Congress. With Weiner no longer working in politics, he spent much of his time taking care of his son.

4. She Stood By Him During the First Two Sexting Scandals 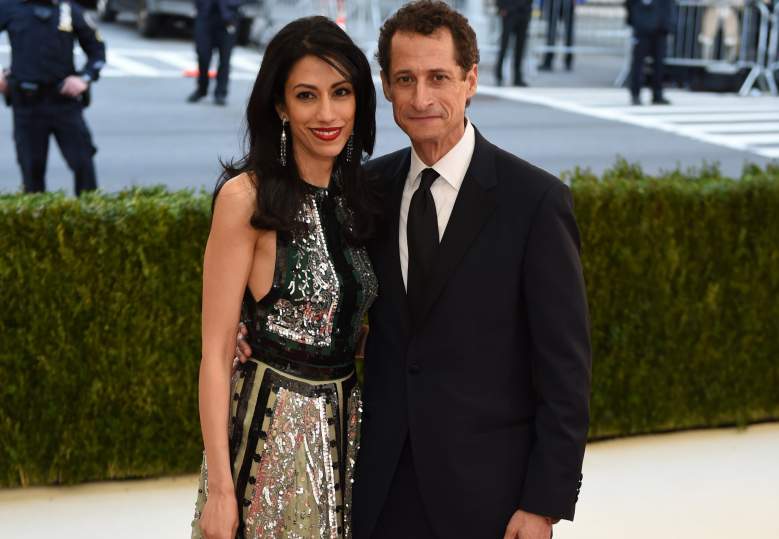 Anthony Weiner and Huma Abedin arrive at the Costume Institute Benefit at The Metropolitan Museum of Art May 2, 2016 in New York. (Getty)

In June 2011, Anthony Weiner inadvertently tweeted out a picture of himself in his underpants, intending to direct message it to a woman. In a news conference, Weiner apologized to Huma Abedin, who was not present.

“I have a loving wife,” he said. “It’s not anything like that. I treated it as a frivolous thing, not acknowledging that it was causing harm to so many people and would eventually come out.”

Weiner has said in multiple interviews and in the documentary Weiner that he initially lied not only to the media, but to his wife, telling her the picture was not of him. Abedin says she believed him.

“I’ve never been on Twitter,” Abedin told The New York Times. “I couldn’t tell you the first thing about how it works. And Anthony had told me in the past that there were these sort of trolls on the Internet who were trying to damage him, take him down. And so, that’s the mind-set I came with to this conversation.”

Abedin said in this 2013 New York Times profile that she had forgiven Weiner.

“It took a lot of work, both mentally and in the way we engage with each other, for me to get to a place where I said: ‘O.K., I’m in. I’m staying in this marriage,'” Abedin said. “Here was a man I respected, I loved, was the father of this child inside of me, and he was asking me for a second chance. And I’m not going to say that was an easy or fast decision that I made. It’s been almost two years now. I did spend a lot of time saying and thinking: ‘I. Don’t. Understand.’ And it took a long time to be able to sit on a couch next to Anthony and say, ‘O.K., I understand and I forgive.’ It was the right choice for me. I didn’t make it lightly.”

Weiner subsequently admitted that the photos were of him, and in June 2011, he resigned from Congress.

In 2013, Anthony Weiner ran for mayor of New York City, with Abedin standing by his side and appearing in a campaign ad announcing his mayoral mid. But in July, more explicit photos of Weiner emerged, and it became clear that his sexting did not stop when he resigned from Congress. Weiner held a press conference in the aftermath of this revelation, and this time, Abedin was present and briefly spoke to reporters.

Abedin remained by Weiner’s side during this second scandal. But in the documentary Weiner, she grows noticeably detached and angry after this turn of events, no longer engaging with the camera crew and not wanting to appear at political events with her husband. Weiner ultimately lost the Democratic mayoral primary to Bill De Blasio.

5. They Separated in August 2016 & Abedin Reportedly Filed for Divorce This Week 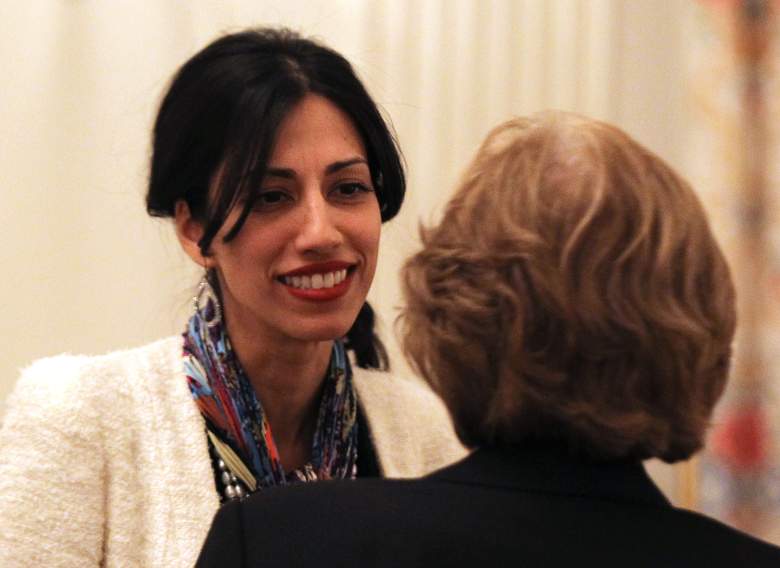 Huma Abedin during an Iftar dinner in the State Dining Room of the White House August 10, 2011 in Washington, DC. (Getty)

In August 2016, The New York Post reported on another Weiner sexting scandal, only this time, he had texted a woman with his young son in the photos. The very next day, Huma Abedin announced that she and Weiner were separating.

“After long and painful consideration and work on my marriage, I have made the decision to separate from my husband,” Abedin said in a statement. “Anthony and I remain devoted to doing what is best for our son, who is the light of our life. During this difficult time, I ask for respect for our privacy.”

In the text conversations, Weiner had made it clear that he was frustrated that he and Huma Abedin rarely ever have sex, saying they sleep together once every two months.

“We occupy the same space from time to time,” Weiner said of his relationship with his wife. “Actually been very civil nowadays.”

Then, in September 2016, The Daily Mail published a report that Anthony Weiner had been sexting with a 15 year old girl. Once again, he frequently texting this young girl photos of his son, also saying that his son is a chick magnet.

In March 2017, The New York Post reported that Weiner and Abedin were giving their marriage another try.

“Huma has been working hard on her relationship with Anthony,” a source close to the Abedin family told The New York Post. “He has been spending 80 to 90 percent of his time at the [Irving Place apartment] they share…If there is a disagreement, he goes to his mother’s apartment in Brooklyn.”

The New York Post also reported that Weiner and Abedin’s breakup in August 2016 was mainly for optics after Abedin faced pressure from the Hillary Clinton campaign.

On May 19th, just hours after Anthony Weiner pleaded guilty to transferring obscene material to a minor, The New York Daily News reported that Abedin had officially filed for divorce.