In a supposed ISIS threat video, a terrorist tells the world: “This is only the beginning.” The video only emerged in the hours after a suicide bomber killed 22 people at an Ariana Grande concert at the Manchester Arena on May 22. The man in the video holds up a placard saying, “Manchester 2017-05-22.” He then says, “Allahu akbar, Allahu akbar.”

In the name of Allah the merciful, the grateful, this is only the beginning. The lions of the Islamic State are beginning to attack all the crusaders. Allahu akbar. Allahu akbar.

To be clear, the video has not been confirmed as being authentic.

The suspect in the Manchester Arena bombing has been named as Salman Abedi. Abedi is thought to have detonated a suicide bomb just outside the arena as the concert ended. In response, Trump called the perpetrators “evil losers” while Ariana Grande has announced that she is suspending her world tour, according to TMZ.

ISIS has claimed responsibility for the attack.

1. Minutes ago, ISIS claimed responsibility for the deadly blast in Manchester. It appeared via Nashir, an official ISIS outlets pic.twitter.com/8QQDmTQ1Dz

While police and anti-terror cops are still on the hunt for more suspects in the Fallowfield neighborhood of Manchester.

In south Manchester where counter terror cops have carried out a controlled explosion and made arrests in connection with terror attack pic.twitter.com/oXfqaboveU 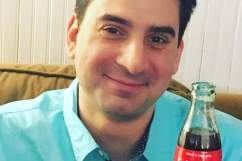 Loading more stories
wpDiscuz
9
0
Would love your thoughts, please comment.x
()
x
| Reply
In a supposed ISIS threat video, a terrorist tells the world: "This is only the beginning."