Members of the U.S. Military are honored as part of Salute to Armed Forces Day prior to the game between the Seattle Mariners against the Texas Rangers at Safeco Field on April 19, 2015 in Seattle, Washington. (Otto Greule Jr/Getty Images)

Learn more about the history and origins of Armed Forces Day here:

1. It Arose From the National Security Act of 1947

President Truman signed the National Security Act of 1947 onboard this VC-54C Presidential transport, the first aircraft used for the role of Air Force One. (Wikimedia)

The act merged the Army and Navy into the National Military Establishment (NME), headed by the newly created role of Secretary of Defense, James Forrestal. Forrestal was appointed by President Harry S. Truman and was the Secretary of the Navy during World War II.

The act also separated the Army Air Forces into its own service by creating the Department of the Air Force and the United States Air Force, according to Air Force Public Affairs. The Marine Corps was established as its own entity under the Navy. Most notably, the act also created the Central Intelligence Agency, the first peacetime non-military intelligence agency.

The National Military Establishment was later renamed the Department of Defense two years later under an amendment to the original National Security Act of 1947. By this time, due to a series of political and personal events suffered by Forrestal, Louis A. Johnson replaced him.

According to ArmedForces.Gov, “President Harry S. Truman led the effort to establish a single holiday for citizens to come together and thank our military members for their patriotic service in support of our country.” Military.com adds, “On Aug. 31, 1949, Defense Secretary Louis Johnson announced the creation of an Armed Forces Day to replace separate Army, Navy and Air Force Days. The single-day celebration stemmed from the unification of the armed forces under one agency — the Department of Defense.”

Colonel Don Campbell with members of the United States Army Fourth Infantry Division stand in front of the American flag prior to the home opener between the Anaheim Angels and the Texas Rangers at the Ballpark in Arlington on April 9, 2004 in Arlington, Texas. (Ronald Martinez/Getty Images)

Prior to the establishment of the Armed Forces Day, the Army, Navy, and Air Force all had their own days.

Army Day should not be confused with the Army’s birthday, which is June 14. According to Military.com, “The origins of Army Day can be traced back to a little-known Defense Test Day, which was observed only twice: once in 1924 and once in 1925. Congress then disallowed any further observances of this day. In response, the Military Order of the World War under Colonel Thatcher Luquer established Army Day. Army Day was first celebrated on May 1, 1928. That date was chosen in hopes of dampening Communists’ celebration of Workers’ Day, which also occurs on May 1.”

Army Day was changed to April 6 in 1929 to commemorate the United States’ entry into World War I. The last Army Day was celebrated in 1949.

The Navy also had its own day, which also should not be confused with its birthday on October 13. Navy Day was originally held on October 27, the birthday of President Theodore Roosevelt. It began in 1922.

Air Force Day was established on August 1, 1947, and was last observed in 1949 due to the establishment of Armed Forces Day.

4. Armed Forces Day Is Not a Federal Holiday

The most recently enacted federal holiday is the Birthday of Martin Luther King, Jr., which was recognized in 1983.

Oddly enough, we have lost two federal holidays since the creation of the United States. In 1861, the federal government stopped observing The Eighth, which celebrated the U.S. victory in the Battle of New Orleans against the British.

The federal government also ceased observation of Victory Day in 1975, which celebrated the U.S. victory against Japan and the end of World War II.

5. It’s a Day of Celebration

Armed Forces Day is a day of celebration since its creation. According to Military.com, “The first Armed Forces Day was celebrated by parades, open houses, receptions, and air shows. In Washington, D.C., 10,000 troops of all branches of the military, cadets and veterans marched past the president and his party. In Berlin, 1,000 U.S. troops paraded for the German citizens at Tempelhof Airfield. In New York City, an estimated 33,000 participants initiated Armed Forces Day “under an air cover of 250 military planes of all types.”

#ArmedForcesDay is 5/20. Think about sending a care package to a member of the U.S. Military as a way to say "thank you" and show support. pic.twitter.com/cvxF8Yhwek

Today it is celebrated with parades, picnics, and parties. 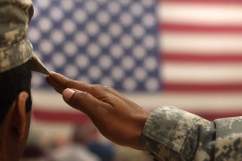 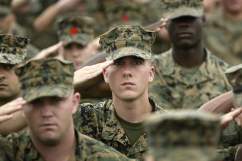