U.S. Marines and sailors of the 1MEF (1st Marine Expeditionary Force) salute the flag prior to the arrival of U.S. Vice President Dick Cheney during a campaign stop July 27, 2004 in Camp Pendleton, California. (David McNew/Getty Images)

1. “My heroes are those who risk their lives every day to protect our world and make it a better place – police, firefighters and members of our armed forces.” — Sidney Sheldon

2. “Freedom does not come without a price. We may sometimes take for granted the many liberties we enjoy in America, but they have all been earned through the ultimate sacrifice paid by so many of the members of our armed forces.” —

3. “The criteria for serving one’s country should be competence, courage, and willingness to serve. When we deny people the chance to serve because of their sexual orientation, we deprive them of their rights of citizenship, and we deprive our armed forces the service of willing and capable Americans.” — Dianne Feinstein

4. “Our armed forces will fight for peace in Iraq, a peace built on more secure foundations than are found today in the Middle East. Even more important, they will fight for two human conditions of even greater value than peace: liberty and justice.” — John McCain

5. “History has taught us over and over again that freedom is not free. When push comes to shove, the ultimate protectors of freedom and liberty are the brave men and women in our armed forces. Throughout our history, they’ve answered the call in bravery and sacrifice.” — Tim Pawlenty

6. “As to the advantages of temperance in the training of the armed forces and of its benefits to the members of the forces themselves, there can be no doubt in the world.” — William Lyon Mackenzie King

8. “Our men and women in our armed forces are the real heroes in this conflict.” — Wayne Allard

9. “I have great respect and understanding for military commitment due to my own family’s involvement with the armed forces.” — Carolyn Murphy

10. “Every member of the U.S. Armed Forces knows what they signed up for, and they know what their job is, and they are proud of their job.” — John Cena 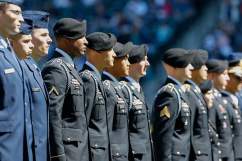