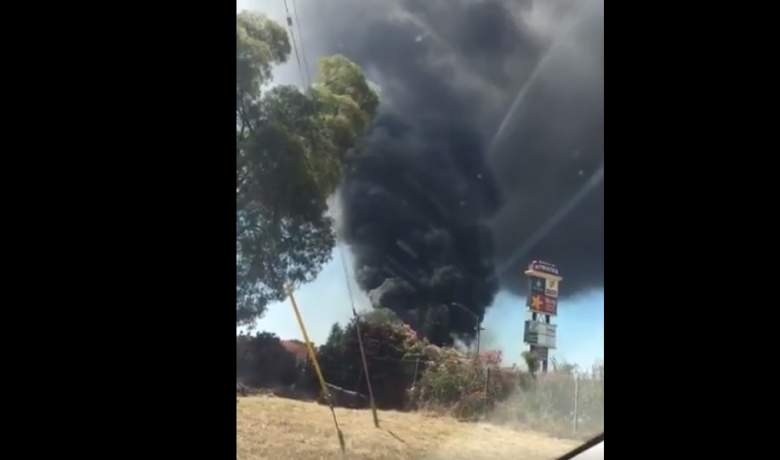 A large gas tanker exploded and caused a huge fire after it crashed and rolled off of a ramp on Highway 99 in Atwater, California on Tuesday.

California Highway Patrol and fire crews responded to the scene to try and contain the fire at Applegate Road. CHP later said that one person — the tanker driver — is dead as a result of the explosion and fire.

Southbound Highway 99 was closed at Westside Boulevard because of the fire and caused major backups to commuters. There is no word yet on when the road will reopen to vehicles.

Southbound traffic is a mess on Applegate as drivers detour off Highway 99 because of the Atwater fire. @ABC30 pic.twitter.com/1rlhjw6MyR

Atwater is a city in central California with a reported population of 28,168 in 2010.

A woman from nearby Merced described the blast to The Merced Sun Star, saying that the fire formed a “wall” and there appeared to be at least two of them.

“I’ve never seen fire move like that,” witness Jeanine Jaroszek said to the newspaper. “I looked up and there was this fire like a wall and then we heard the explosion — the first explosion.

The force from the explosions could also be felt at nearby fast-foot restaurants, as customers were forced to flee the area for their safety.

Other businesses around the area were evacuated as there were initially reports of gas leaks. Students at nearby Atwater Community High School, attending their graduation ceremony, were sent home as the event was cancelled.

The Fire Roared Nearby a Gas Station

Another video on the #breaking fire in Atwater @ABC30 pic.twitter.com/GWmfQYyadu

The Fire Continued to Pick Up Steam

Here's another look at the tanker truck fire in Atwater from viewer Matthew Patrick: https://t.co/CkTvvnl67B pic.twitter.com/SZ2m31QtgA

Large Amounts of Black Smoke could Be Seen From Far Away

Fire off 99 in Atwater. pic.twitter.com/TnXTGOOiWL

Buildings Were Seen Burning As the Fire Raged On

Viewers have been sending us these photos of tanker fire in #Atwater near 99/Applegate: pic.twitter.com/zxdugz8mHm

Read More
Breaking News, Fire
A large tanker exploded in Atwater, California on May 23. The incident brought about many crazy videos and photos which were posted to social media.