CBS4 of Miami used the mugshots of Samuael Martindale, 35, and Mackendy Jules, 30, during a news report about the two African-American men killed by drunk driver Alyza Russell in a 2013 drunk driving incident. People on social media have cried foul at the depiction of the two victims as criminals. The video comes from December 2016 but has recently picked up steam on Reddit.

Russell killed the two men when she lost control of her mother’s Porsche and drove through bushes and into a parking lot in Fort Lauderdale. According to the Sun Sentinel, “Martindale and Jules were regulars at a nonprofit center that helps the homeless. Family members described them Friday as decent men trying to bounce back from hard times.” Russell’s blood alcohol was more than double the legal limit.

According to NBC Miami, she also planned to flee to Ireland and paid for a British passport after the crash. However, the police acted on the tip and Russell had to surrender all her passports. Russell then claimed that it wasn’t an attempt to flee her trial but that she had already had a vacation planned to Ireland.

However, more upsetting to people was CBS4’s use of the victims’ mugshots. As Samuel Keller commented on the YouTube video, “Are those mugshots of the VICTIMS? If so, that’s shameful.” 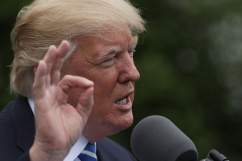