Trump revealed “code-word information” and “revealed more information to the Russian ambassador than we have shared with our allies,” the source told the Post.

According to the Post, Trump revealed the information during the meeting while appearing to boast about his insider knowledge of a threat to the Western world from ISIS involving the potential use of laptops to conceal explosives on airplanes. “I get great intel. I have people brief me on great intel everyday,” Trump told the Russian ambassador, according to the Post. Trump then revealed aspects of the threat that the U.S. has learned through espionage capabilities of a key partner. As president, Trump is allowed to declassify information, the Post reports.

“It is all kind of shocking,” a former senior U.S. official who is close to current administration officials told the Post. “Trump seems to be very reckless and doesn’t grasp the gravity of the things he’s dealing with, especially when it comes to intelligence and national security. And it’s all clouded because of this problem he has with Russia.”

National Security Adviser H.R. McMaster hit back against the report at the White House.

“There is nothing the president takes more seriously than the security of the American people. The story that came out tonight as reported is false,” McMaster told reporters. “The president and the foreign minister reviewed a range of common threats to our two countries, including threats to civil aviation. At no time, at no time, were intelligence sources or methods discussed. And the president did not disclose any military operations that were not already publicly known.”

Trump, while on the campaign trail and since taking office in January, has tweeted several times about the dangers of mishandling classified information, including saying last year that Hillary Clinton was “not fit” to be president because of he claimed she was not careful with classified information while she was secretary of state.

Here are some of Trump’s past tweets about handling classified information:

Leaking, and even illegal classified leaking, has been a big problem in Washington for years. Failing @nytimes (and others) must apologize!

find the leakers within the FBI itself. Classified information is being given to media that could have a devastating effect on U.S. FIND NOW

…is all of the illegal leaks of classified and other information. It is a total "witch hunt!"

Lyin' Hillary Clinton told the FBI that she did not know the "C" markings on documents stood for CLASSIFIED. How can this be happening?

150 Clinton E-mails still contain classified information. More sensitive when she was Sec.of State. This is a very big deal.

His tweets about classified information date back to before he was running for office, often focusing on Edward Snowden and President Obama:

On top of the disrespect shown by Russia, don’t forget they still have Snowden, who has given them (& everyone) massive US secrets.

Can you imagine not taking Snowden's passport away before he jetted happily away to foreign lands (where he gave away many U.S. secrets).

Obama has no problem leaking national security secrets. Why can't he release his records? Especially when $5M is going to charity.

Our country and our "leaders" are getting dumber all the time. Now they are about to release full documentation on torture. Will destroy CIA

Fact–Obama does not read his intelligence briefings nor does he get briefed in person by the CIA or DOD. Too busy I guess!

Yesterday there was yet another massive intelligence leak by the @BarackObama administration. http://t.co/3xYbmuyx

The Amateur. On his trip to Afghanistan, our commander-in-chief disclosed the CIA Chief’s name. Unsafe disaster! http://t.co/1mT4JGUghR 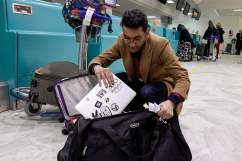