After midnight this morning, President Donald Trump took to Twitter and misspelled “press coverage” as “covfefe” in a tweet reading: “Despite the constant negative press covfefe.” However, what he was trying to say is up for debate.

Despite the constant negative press covfefe

The tweet, since deleted but sent at 12:06 a.m., was favorited nearly 10,000 times in one minute and drew the ridicule of online Trump critics.

the 'word' covfefe existed on exactly nine web pages on the entire Internet until its appearance here tonight https://t.co/TJJCXmrjaQ

Later this morning, Trump commented on his spelling error:

But following the original tweet, memes began to make their way online. See the funniest ones here:

"And the orb, having bestowed upon you the power to smite your enemies, can be invoked using the simple code word '#covfefe '" pic.twitter.com/jKx255mWDN

I have the best #covfefe. pic.twitter.com/xBBqhfu6a9

Wow, that was quick! #covfefe (wasn’t me btw) pic.twitter.com/oJkJNdC7Gr 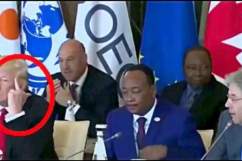