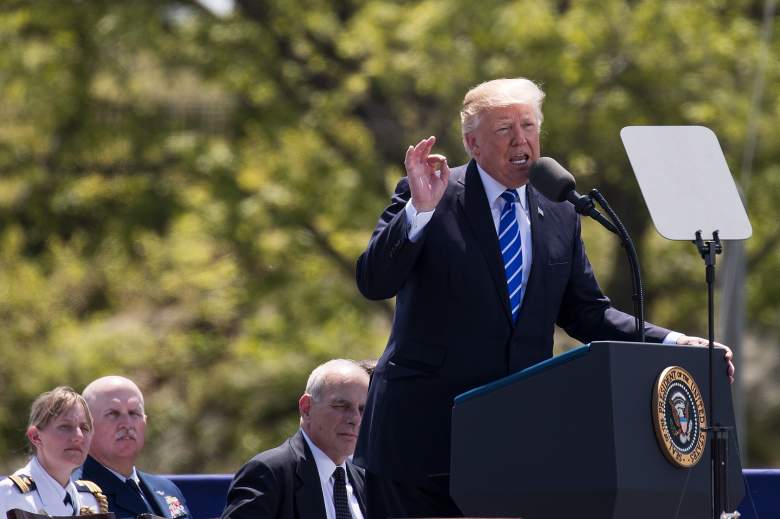 Stop if you’ve heard this one before: President Donald Trump sent the internet into a never-ending spiral by publishing one tweet late in the evening.

Trump sent out the controversial tweet at 12:06 a.m. EDT on May 31, and it had some people questioning exactly what it was that he meant.

If you haven’t discovered yet, the “covfefe” word that Trump used in the tweet isn’t actually a word. Some thought that Trump meant to say “Despite the constant negative press coverage” but accidentally hit publish without completing his sentence and correcting the misspelling.

What’s even more astonishing to some is that the tweet hadn’t been taken down from Twitter for hours.

The incident has led to much reaction on Twitter with memes and hilarious tweets surfacing.

It should be noted, however, that Trump reportedly uses his personal Twitter account on his own — most of the time. The official presidential account is controlled by staff members.

But the use of “covfefe” isn’t the first instance where the 45th president of the U.S. has issued an official tweet with an alleged misspelling or mistake in it.

This happens so often that there’s a Twitter account that was crafted for the specific goal of correcting Trump’s spelling and grammar errors.

One of Trump’s most controversial tweets as president was when he accused former President Barack Obama of tapping the wires on his phones at Trump Tower. Except Trump used “tapp” instead of “tap,” which isn’t a word.

Interestingly enough, though, the president never corrected the spelling in the tweet like he has to many others.

It was one of Trump’s first tweets as president of the U.S. on the official account of the president. And he misspelled a common word, using “honered” instead of the correct “honored” when saying that he’s “honored to serve you, the American People, as your 45th President of the United States!”

He later issued a new tweet with the correct spelling.

Trump sent out a tweet in December 2016 using the word “unpresidented” when trying to bash China for commandeering a U.S. research drone.

In this instance, Trump seemed to have used the word “unprecedented” instead of “unpresidented.” He deleted the original tweet and re-issued a new one with the correct word.

Thr coverage about me in the @nytimes and the @washingtonpost gas been so false and angry that the times actually apologized to its…..

This one isn’t so much a misspelling as it is a misuse. Just over one week into his presidency, Trump used Twitter to criticize the media for their alleged attacks on his administration. He wrote in the tweet: “Thr coverage about me in the @nytimes and the @washingtonpost gasbeen so false and angry that the times actually apologized to its…

Trump left the tweet up and opted not to correct it.

Education must not simply teach work – it must teach life. – W.E.B. DeBois pic.twitter.com/Re4cWkPSFA

This one is a bonus from Trump’s administration: the U.S. Department of Education. It issued the above tweet with the last name of NAACP co-founder W.E.B. Du Bois misspelled to “DeBois.”

What’s probably worse than that is that it issued a new tweet apologizing for the typo. But in it, it said “our deepest apologizes for the earlier typo” when it should have used the word “apologies.”

In their apology for misspelling W.E.B. Du Bois in their post today, the Department of Education misspelled "apologies." #WOW! pic.twitter.com/KAOgJ0hw3V

That’s the Department of Education that we’re talking about.

Loading more stories
wpDiscuz
9
0
Would love your thoughts, please comment.x
()
x
| Reply
Donald Trump sent the internet into a spiral early Wednesday morning with a tweet with the word "covfefe" in it. See Trump's top spelling errors of all time.