U.S. President Donald Trump speaks at an event with the Independent Community Bankers Association in the Kennedy Garden of the White House May 1, 2017 in Washington, DC. (Alex Wong/Getty Images)

President Donald Trump took to Twitter this morning to advocate for a government shutdown in September if the rules of Congress don’t change to a 51% majority. Trump added, “Our country needs a good ‘shutdown’ in September to fix mess!” Current cloture requires a three-fifths majority or 60 votes.

either elect more Republican Senators in 2018 or change the rules now to 51%. Our country needs a good "shutdown" in September to fix mess!

The last government shutdown occurred during the Obama administration from October 1 through 16, 2013 when the federal government ended most routine operations because legislation appropriating funds for the fiscal year of 2014 was not enacted in time. According to the Washington Post, the shutdown, which was spearheaded by Republicans in Congress, spurred negative views of Republicans and the tea party movement with over 50% of Americans blaming Republicans for the shutdown.

The 2013 shutdown centered around funding for the Affordable Care Act, also known as Obamacare.

Congress recently reached a deal to fund the government through September 2017. According to CNN, “The plan would add billions for the Pentagon and border security but would not provide any money for President Donald Trump’s promised border wall with Mexico.”

Trump also took other hits to his campaign promises by Congress, with the health-oriented news website Stat reporting that “the National Institutes of Health will get a $2 billion funding boost over the next five months… a sharp rejection of President Trump’s proposal to cut $1.2 billion from the medical research agency in the current fiscal year.” 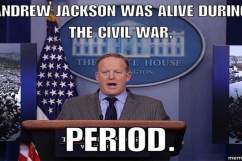 Donald Trump, Andrew Jackson, & The Civil War: All the Memes You Need to See

Read More
Congress, Donald Trump, Government, Republican, Twitter
President Donald Trump took to Twitter this morning to advocate for a government shutdown in September if the rules of Congress don't change to a 51% majority.