Tonight, Drake performed live from inside the Bellagio Fountains at the 2017 Billboard Music Awards. He also took home the award for Top Male Artist, beating Adele’s record for the most BBMA’s earned in a single night.

Wearing a white tracksuit, the rapper sang More Life’s “Gyalchester” with fires ablaze around him.

Drake took the stage (or rather, the fountain) for the first time since joining Rihanna for “Work” in 2016. Mark Bracco, the executive vice president for programming and development and the Billboard Music Awards music producer recently said:

You know, Drake does not perform on television very often so I think whenever he does it’s a real event. We built a real terrific relationship with his team, working creatively with them and coming up with a big idea, and I think it’s gonna be a very, very big moment in the show. It’s not a surprise necessarily but it’s gonna be a moment that people aren’t exactly expecting…. It’ll be memorable, I promise you that.

Bracco added on that the performance took months to plan. “We were talking with Drake’s people for months about doing the show. Obviously he then became the biggest nominee and that’s a big deal and just trying to come up with something really different and unique and exciting and spectacular… And that’s what Drake deserves is a big, huge moment and, luckily, in working with his team I think we’ve come up with something creatively that’s going to be really astounding.”

Tonight’s other stand-out performances included Miley Cyrus singing her TV debut of “Malibu”, Camila Cabello with her solo debut, and Celine Dion singing “My Heart Will Go On” to celebrate the song’s 20th anniversary. Drake led the pack tonight with 22 nominations, and before the ceremony even began, he had bagged 10 awards. Some of the singer’s early wins include top Billboard 200 artist, top Hot 100 artist, top rap artist, top rap album, and top R&B song.

Tonight’s co-hosts were Ludacris and Vanessa Hudgens, and aired live from the T-Mobile Arena in Las Vegas. This marked Ludacris’s fourth consecutive time hosting the gig, and he’s said that he’ll keep coming back to host as long as the BBMA’s are in Vegas. It was Vanessa’s first time taking on any kind of hosting job, but she and Luda displayed great co-host chemistry. He even made her rap. 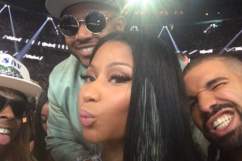 Read More
Drake
Tonight, Drake performed at the 2017 BBMAs from the middle of the Bellagio fountain in Vegas.