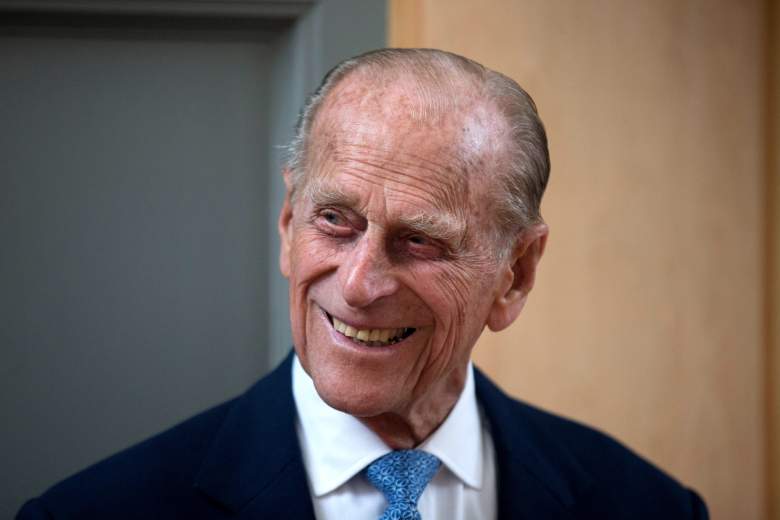 After a night of speculation, the word from England is that a “staff meeting” at Buckingham Palace has nothing to do with the health of Queen Elizabeth II or her husband, Prince Philip.

A report about a supposedly emergency meeting at Buckingham Palace on May 3 set off a flurry of late-night concern about the health of Prince Philip, in particular. Media outlets in Canada and New Zealand were, somewhat bizarrely, the first to tamp down the raging speculation that Philip might have died, quoting Buckingham Palace as saying both the Queen and Philip are alive.

Hours after the speculation first ignited, The Associated Press reported: “Buckingham Palace official to AP: Royal household staff called to meeting but ‘no cause for concern.'”

It turned out that there was an announcement: Prince Philip will stop accepting public engagements starting in the fall.

Because protocol says the death of Philip will be announced at 8 a.m. on the BBC when it happens, people on social media stayed awake until that appointed hour. At 8 a.m. London time, the BBC’s royal correspondent finally weighed in:

There'll be a staff meeting at Buckingham Palace this morning. It's not to do with the health of either the Queen or Prince Philip.

Yes, that was it. “The BBC’s royal correspondent Peter Hunt understands the meeting is not about the health of either the Queen or Duke of Edinburgh,” the news site added.

8:10 am The only royal discussed on the BBC World Service is the Southern Royal Albatross. #TrueStory #buckinghampalace #PrincePhilip

8.09am and no 8am announcement? All back to normal now then? #buckinghampalace #PrincePhilip #HRH

After hours of people insisting on Twitter that Philip was dead, he turned out to be very much alive.

On the bright side, Prince Philip will have gotten a kick out of all this #buckinghampalace

It all started because of a report of the supposed emergency meeting at the palace. However, an ABC royal contributor wrote on Twitter that such a meeting was not unusual.

Sorry I am not answering individual questions. Special meetings of Palace staff are not unprecedented. There was no meeting called for 3am.

My understanding re so called Buckingham Palace "emergency meeting" is there is no cause for alarm.

According to the Newcastle Herald, “The Queen’s royal staff have reportedly been called from across the UK to an emergency meeting at Buckingham Palace.” The news site reported, “News of the ‘highly unusual’ meeting, which was called at 3am English time, has sparked speculation about an announcement about the Queen or her husband Prince Philip.”

The report derived from the UK Daily Mail and had not been confirmed by other media, including in Great Britain. According to the original Daily Mail report, “Speculation amongst Buckingham Palace staff was rampant last night as the Queen’s most senior aides called her entire household to an emergency meeting today.”

The story continued: “Servants from royal residences across the country have been ordered to London and will be addressed this morning by the Lord Chamberlain, the most senior officer of the Royal Household, as well as Her Majesty’s right-hand man, Private Secretary Sir Christopher Geidt.”

That report quickly morphed into fears that Philip – or even the Queen – had died. That doesn’t make a lot of sense, if you think it through; the deaths of the Queen and Philip have presumably already been planned in painstaking detail, and would not require a sudden, whirlwind meeting if they occurred.

Compounding the speculation: There was no clear denunciation from the Palace for hours until the reports finally started appearing in scattered foreign press outlets that he and the Queen were alive. Maybe everyone was sleeping, who knows. However, the Palace missed a chance to immediately shoot down the rumors, and instead they simmered and mushroomed for hours.

It took about two seconds for new theories to abound.

Major British media, such as the BBC, were not reporting that the Duke of Edinburgh had passed away, but many were oddly silent for quite some time. Philip is 95-years-old; he was born on June 10, 1921. 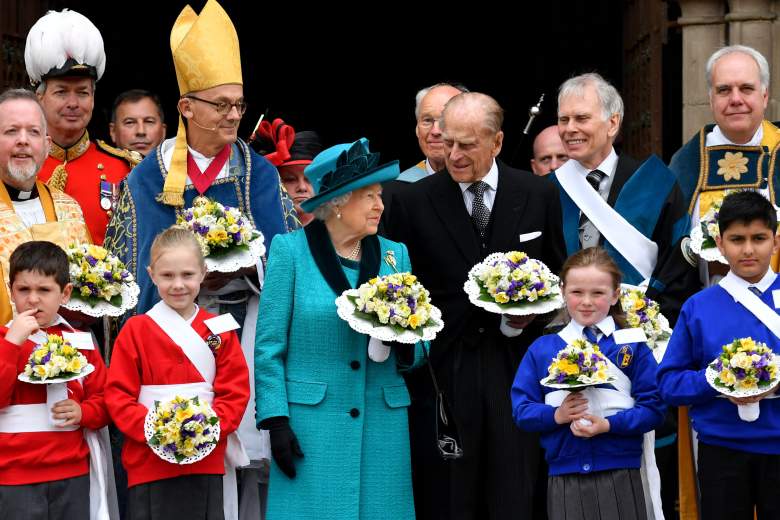 The Palace even declined comment to some prominent British and U.S. media outlets, fueling more mystery, although some royal observers said the meeting was not that unusual.

The Daily Beast reports that it’s the BBC that would announce the death of the Queen’s husband, and there would be a very specific protocol for doing so. “It is believed that if Philip were to die in the night, the news would not be announced by Buckingham Palace until after 8 a.m. The BBC would be informed first, and tasked with making the official announcement,” the site reported. It was just before 5 a.m. in London at the time the speculation first raged about Philip’s health, setting off rounds of false speculation that a death announcement was imminent but being withheld until 8 a.m. The Buckingham Palace switchboard was closed.

The first two outlets to tamp down speculation were outside Britain.

New Zealand media reported: “Buckingham Palace has told 1 NEWS an emergency meeting of the Queen’s entire household reportedly called for tonight is not to announce the death of either Her Majesty or her husband, Prince Philip.”

A senior broadcast producer for CTV National News in Toronto reported that Buckingham Palace said both the Queen and Prince are fine.

Just talked to #BuckinghamPalace press office. No comment on reports of urgent summit. "Her Majesty and Prince Philip are alive and well."

The Canadian journalist noted that both the Queen and Prince Philip had public appearances on May 3, writing, “Should also be noted the Queen met with British PM Teresa May on Wednesday. No report Her Majesty was unwell.”

Prince Philip was photographed on May 3, 2017 opening a cricket club just a few hours before the speculation grew. He looked healthy and vigorous, considering he is close to 96-years-old. The Palace listed this engagement for Philip and the Queen for May 4: “will attend a Service for Members of the Order of Merit at the Chapel Royal, St. James’s Palace. Afterwards, Her Majesty and His Royal Highness will give a luncheon for those attending the Service.” 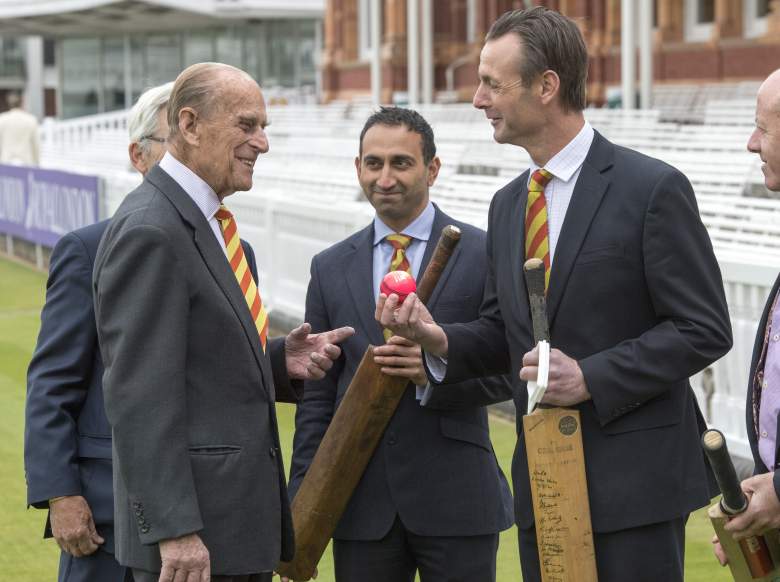 Britain’s Prince Philip, Duke of Edinburgh and Honorary Life Member, Marylebone Cricket Club (MCC),(L) is shown a pink cricket ball which is used in day/night matches, by former England cricketer John Stephenson during his visit to open the new Warner Stand at Lord’s Cricket Ground in London on May 3, 2017. (Getty)

Here’s video from the same event:

Prince Philip, 95, at Lord's cricket ground, uttering one of his favourite lines: pic.twitter.com/pltAwfbhai

According to UK Mirror, social media reports that Buckingham Palace’s flag was at half mast were false. Social media users posted pictures to prove it was not at half mast.

The gates of Buckingham Palace, shortly before sunrise on May 4, 2017. pic.twitter.com/epjyDUbBPz

Some people couldn’t help but make jokes as the hours passed without clarification.

#BuckinghamPalace to report that Prince Philip passed away…….3 years ago.

They're about to announce @realDonaldTrump as king #BuckinghamPalace #thequeen #PrincePhilip

Speculation of a death in the Royal Family? I'm hoping it's to announce Prince Philip is taking over #Brexit negotiations #BuckinghamPalace

The royal correspondent for the Daily Express said the meeting wasn’t that unusual, but the Palace wasn’t commenting. People Magazine said that Buckingham Palace declined to comment but quoted a source as saying there was no cause for alarm.

The Lord Chamberlain is addressing all staff, something he does once a year and occasionally at other times. Rare but not unprecedented.

He added that Buckingham Palace was not commenting on the speculation.

Buckingham Palace isn't commenting but it doesn't sound like this is about a royal death.

I'm expecting there to be some sort of announcement from Buckingham Palace later after a meeting of all staff there this morning.

Don't know where stories of this meeting being at 3am have come from. The meeting hasn't happened yet.

According to the UK Star, “a Palace source has told us ‘there is no death.’ However, there will be an announcement today.” Compounding the mystery, the British outlet reported that the meeting had everyone on “tenterhooks” because the meeting was called at the “11th hour.”

When the Queen dies, there is an elaborate protocol in place. According to UK Mirror, “The Queen’s death will trigger an official 12-day period of national mourning. Union Jacks will be flown at half mast throughout the country and books of condolence will be opened at embassies across the world. The London Stock Exchange will be closed for at least the day of the Queen’s funeral and potentially for several days – potentially costing the economy billions.”

Nothing confirmed by the Palace but lots of reports that RIP Prince Philip, only a month shy of 96#DukeofEdinburgh #RIPDukeofEdinburgh pic.twitter.com/49vi87GK3g

Because of his advanced age, people have wondered about Philip’s health for years, dating back at least to 2015 when, reports the Daily Beast, speculation “intensified of late by the reduced number of public appearances made over the summer and scheduled for the fall.”

The speculation upset people around the world.

Me watching #BuckinghamPalace like…
And I'm not British!!!! pic.twitter.com/6fr2vLyDcL

Both the Queen and Philip were ill over Christmas with severe colds. Queen Elizabeth II did not attend church services on Christmas Day 2016, which some news services described as “unprecedented.” Then, Buckingham Palace announced she wouldn’t attend New Year’s services either.

Other Royal family members did attend church at Sandringham on Christmas Day. They included Prince Philip, who was also suffering from a bad cold earlier in the week, according to Buckingham Palace. Prince Charles, Camilla, and Prince Harry were also at the Christmas Day Christmas services. According to 9 News, the Queen and Phillip “delayed their departure from London to Sandringham” over Christmas “as they were both suffering from heavy colds.”

This article is being updated as more information becomes known. 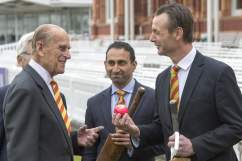 Read more about the Queen’s health scare over Christmas here: 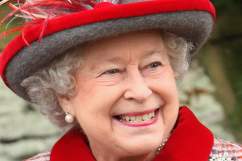 Read More
Breaking News, Queen Elizabeth
wpDiscuz
0
0
Would love your thoughts, please comment.x
()
x
| Reply
A report that Buckingham Palace had an emergency meeting has set off unconfirmed reports about Prince Philip's health and whether he is dead. Buckingham Palace says the Queen and Philip are alive, some reports say.