The city of New Orleans, Louisiana has removed a large Jefferson Davis statue, taking it down under the cover of darkness to ward off threats.

You can watch the statue come down above as workers tied large yellow strips of cloth to it.

The statue came down in the early morning hours of May 11 as supporters and opponents of its removal squared off, some waving American and Confederate flags. According to NBC, four Confederate statues are being removed overall in Louisiana after legal battles.

New Orleans Mayor Mitch Landrieu supported the New Orleans’ statue’s removal, drawing the ire of protesters, NBC reported. According to the network, workers removed the statue in the dead of night to reduce the chances of problems.

Various news outlets were at the scene and captured different vantage points of the moment.

CNN reports that the statue “was lifted shortly after 5 a.m. (6 a.m. ET),” as supporters of its removal chanted “Na Na Hey Hey Kiss Him Goodbye,” and opponents stood nearby with Confederate flags.

The Jefferson Davis Monument in New Orleans is no more; Crews topple the controversial memorial with a crane. https://t.co/vPAU5kKfpQ #ABC13 pic.twitter.com/Ntih03V6cB

The City of New Orleans had a Davis statue because Davis lived in New Orleans following the Civil War and died in the city in 1889, CNN reports. In 2004, “the words ‘slave owner’ were painted on the base of the monument,” according to CNN. 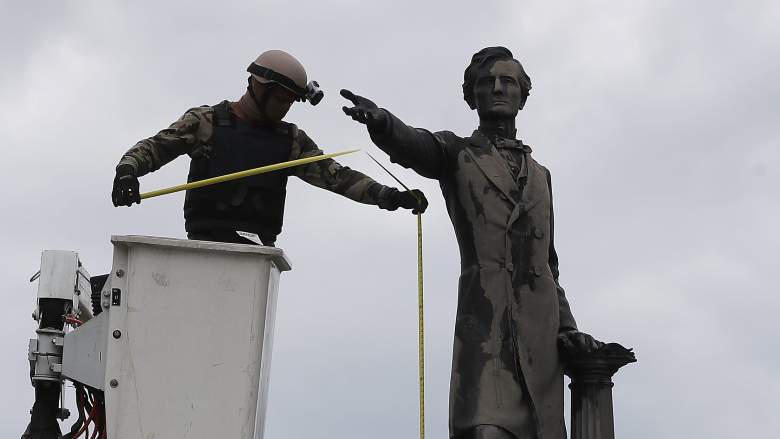 A New Orleans city worker wearing body armor and a face covering as he measures the Jefferson Davis monument on May 4, 2017 in New Orleans. (Getty)

The Davis statue isn’t the only one coming down in New Orleans as supporters of the removal say the city should not honor in any way an era that celebrated white supremacy; New Orleans is also planning to remove a statue of General Robert E. Lee and P.G.T. Beauregard, a Confederate general, according to The New York Times.

The newspaper reports that efforts to expunge Confederate remembrances from public spaces across the United States escalated after the mass slaying at a black church in South Carolina.

Loading more stories
wpDiscuz
9
0
Would love your thoughts, please comment.x
()
x
| Reply
The Jefferson Davis statue in New Orleans was removed by the city. Watch video and photos of the statute coming down amidst protests.