Former U.S. Senator and baseball player Jim Bunning has died. His son, David Bunning, broke the news on his Twitter account, where he wrote: “Heaven got its No 1 starter today. Our lives & the nation are better off because of your love & dedication to family.” He was 85. Read the original tweet below:

Heaven got its No 1 starter today. Our lives & the nation are better off because of your love & dedication to family. pic.twitter.com/qkCjHIM32E

“Senator Jim Bunning led a long and storied life. From his days in the major leagues to his years as my colleague in the Senate — and the many points in between, from the City Council to the House of Representatives — Jim rarely shied away from a new adventure. This Hall of Famer will long be remembered for many things, including a perfect game, a larger-than-life personality, a passion for Kentucky, and a loving family. Elaine and I offer our sincere condolences to Mary and the entire Bunning family.”

Jim Bunning’s career was no doubt a series of impressive achievements. But, as he often attested to, none of it would have been possible without the support of his wife Mary Katherine Theis. Learn more about Mary and their marriage together here.

Jim Bunning was born in Southgate, Kentucky in 1931. He graduated from St. Xavier High School in Cincinnati in 1949, and received a Bachelor’s Degree in economics form Xavier University in 1953. Throughout all of this, he was dating Mary Catherine Theis, a fellow Kentucky native who he had known since he was a child. “We liked each other and fell in love in high school,” said Mary, “But we liked each other all the way through grade school.” Jim revealed that they began dating in eight grade, “but not with the cooperation of her father. He was very protective. He had four daughters and he didn’t trust any of the guys that dated his daughters.”

Jim was approached by Detroit Tigers scout Bruce Connatser after he completed high school. At the behest of his parents, Bunning finished college before signing with the Tigers, where he was given a $4,000 signing bonus and a $150-a-month salary. According to the Society For American Baseball Research, however, Jim used this bonus to buy an engagement ring for Mary. They were subsequently married in January of 1952, and Mary became pregnant with their first child the following year.

2. She Supported Him When He Was A Minor League Player

The first couple years of Jim’s major league career were anything but effective. While in the Class B Three-I League in 1952, the prospect went a disappointing 8-10 in his second season, while walking more hitters than he struck out. Discouraged by the season, it wound up being the support of Mary that kept Jim’s spirit up during this time.

In the 1998 biography Jim Bunning, author Frank Dobson made note of this, writing: “Without a devoted, understanding wife, Jim Bunning couldn’t have survived those seven years bouncing around the minor leagues– from Richmond, Indiana, to Davenport, Iowa, to Williamsport, Pennsylvania, to Buffalo, New York, to Little Rock, Arkansas, back to Buffalo, and finally to Charleston, West Virginia.” Dobson adds that Jim “was able to concentrate on what he had to do because he knew she was doing what she had to do.” Bunning would play in the major leagues from 1955 to 1971, where he threw a perfect game and finished with the second-highest total of strikeouts in history (he is currently seventeenth). He was inducted into the Hall of Fame in 1996.

All this was very ironic, given that Mary actually hated baseball: “I really hated [it]. I hated it because it took him away from me.”

3. They Lost A Child Three Days After It Was Born

Though they were fortunate to have numerous children afterwards, Jim and Mary were subject to a tragedy in 1953, when their daughter Laura passed away only three days after she was born. It was their second child, after Barbara, who had been born eleven months after the couple had married. Laura was also born in the midst of their most difficult time as a couple, as Jim was struggling to establish himself as a pitcher and Mary was isolated, forced to move from city to city without much outside contact.

“Then we had Laura the next year,” Mary recalls, “She’s the little girl that died, and Jim had to leave again, and that was a horrible time for me. I had a lot of sorrow over that.” According to Dobson’s biography, Laura contracted spinal meningitis and died three days later. Mary’s parents and her sister Joan helped her during this time of mourning, as Jim was pitching in Buffalo, New York.

4. They Had Nine Other Children

David Bunning and his father Jim in 2002.

Jim and Mary had nine children during their marriage, including four girls and five boys. Needless to say, with Jim either playing ball or playing politics, Mary was the one who did most of the parenting. “Raising nine sons and daughters can be hard on the nerves,” she later admitted, “All year [while Jim was doing his job] I was the disciplinarian. I was the boss. I got tired of it. So when he came home, I said ‘It’s your turn.’ That was difficult for us, and difficult for the kids.”

5. She Aided In His Political Career

When Jim traded in his spikes for the law, Mary was there once again to provide her support. In fact, the political scene allowed her to play a larger part in her husband’s affairs, she as Dobson noted, she was a natural. “Without her, there’s no way Jim could have made it through those early campaigning efforts,” he writes, “Mary had this knack of walking up to strangers and making them feel like they were old friends in minutes. Her warmth, her enthusiasm were ideal for the taxing job of being a politician’s wife.”

In 1986, Jim was elected to the U.S. House of Representatives from Kentucky’s 4th Congressional District, and served the house until 1999. He was then elected to the United States Senate from Kentucky, where he served two terms as the Republican juror U.S. Senator. He is the only Hall of Fame baseball player to serve in Congress. 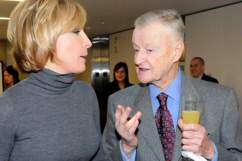