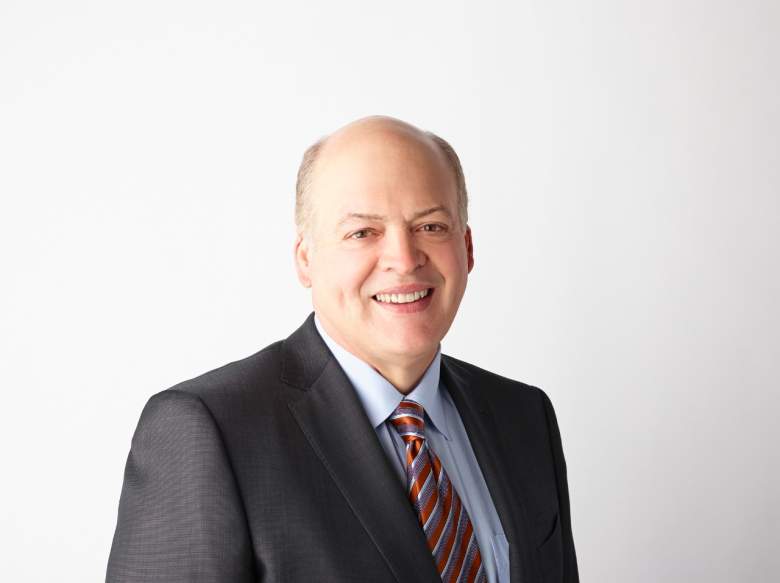 Ford Motor Co. has announced that CEO Mark Fields will be replaced by Jim Hackett, previously head of Ford’s Smart Mobility Unit, according to Detroit Free Press. Fields had been with Ford since July 1, 2014. Hackett was previously CEO of Steelcase, one of the leaders in the furniture manufacturing business and was interim athletic director at the University of Michigan.

Here’s what you need to know about Hackett:

1. Hackett Was the Youngest CEO in Steelcase History

Hackett had over a 30-year career at Steelcase, a leader in the office furniture business. Hackett was with the company from 1981-2014. He joined Steelcase in 1981 and held a variety of sales and marketing positions as he rose up the ranks, according to MLive.

In 1994, Hackett was named CEO of Steelcase at age 39, making him the youngest leader in the history of the company. He held the position for 19 years before retiring in 2014.

Much of Steelcase’s success is credited to Hackett’s vision to integrate technology into Steelcase’s products. His understanding of the future came from time he spent in California during the 1990’s, where he spent time rubbing shoulders with technology pioneers like Apple founder Steve Jobs and IDEO founder David Kelly, according to MLive.

Hackett is credited with expanding Steelcase’s business model, helping to transform the company from a traditional office furniture manufacturer to a designer of cutting-edge workspaces, shifting away from cubicles to an open space environment, according to Forbes. 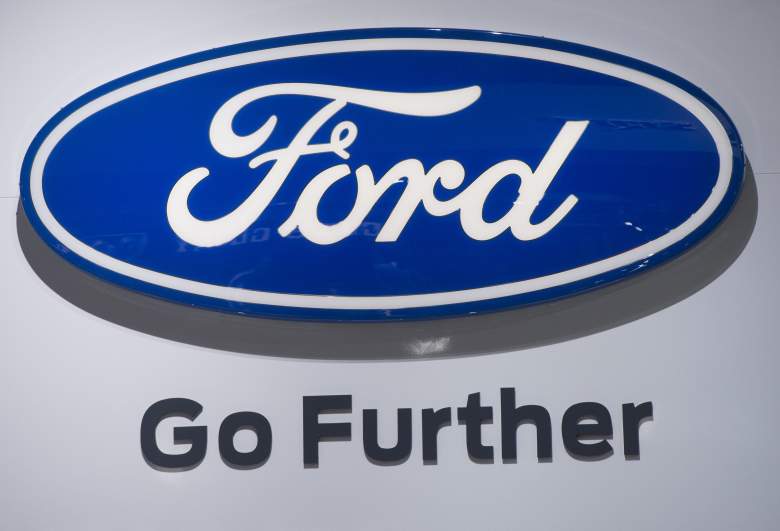 The Ford Smart Mobility LLC is part of Ford’s expanded business model to be both an auto and a mobility company. Through Ford Smart Mobility, the company plans to be a leader in connectivity, mobility, autonomous vehicles, the customer experience and data and analytics, according to Ford.

Before joining Ford Smart Mobility LLC, Hackett was a member of the Ford Motor Company Board of Directors staring in 2013, according to Ford. He also served on the Audit and the Nominating and Governance committees.

Ford Executive Chairman Bill Ford said in an interview that Hackett is the right person to lead Ford as it expands into new business areas, like making self-driving shuttles, because he is a “visionary” who knows how to remake a business, according to StarTribune.

3. Hackett Served as Interim Athletic Director at the University of Michigan 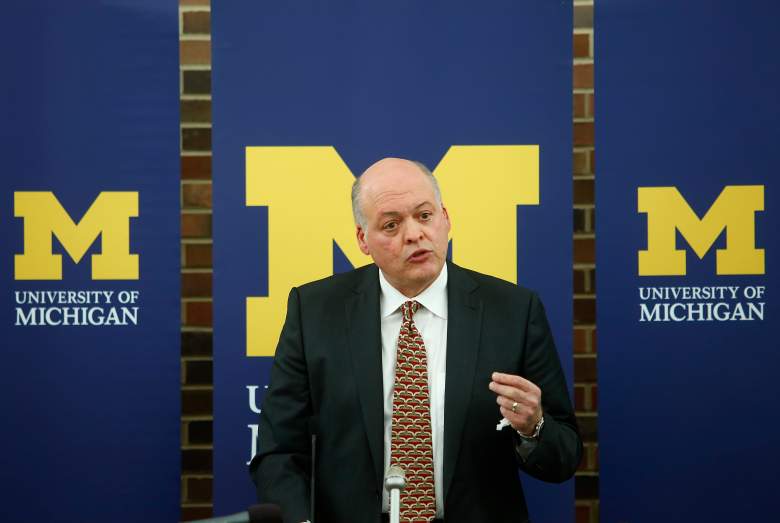 Jim Hackett at a University of Michigan news conference (Getty)

Hackett was appointed Michigan’s interim athletic director on Oct. 30, 2014. He said his biggest goal was to turn around the school’s football program.

Hackett’s crowning achievement as athletic director was the hiring of former San Francisco 49er’s Head Coach Jim Harbaugh. Hackett was able to convince the coach to join MU’s program just a month after becoming the school’s athletic director. According to USA Today, Hackett’s pursuit of the coach, combined with both their ties to MU, were the main reasons Michigan was able to acquire Harbaugh.

Harbaugh signed a seven-year deal for around $5.7 million annually. Harbaugh led the Wolverines to a 10-3 record and a win in the Citrus Bowl in his first year as head coach. In 2016, Harbaugh again led the team to a 10-3 record, before losing in the Orange Bowl. Harbaugh played quarterback at Michigan under coach Bo Schembechler from 1983-1986 and went on to play 14 seasons in the NFL.

Hackett also oversaw a record $169 million, 15-year contract with Nike. At the time of the deal, it was the largest apparel contract in college sports history, according to FOX Sports. The deal runs through 2027 with an option for Michigan to extend it through 2031. Michigan will get $85 million in Nike apparel and products and $88.8 million in base compensation over the length of the contract, according to FOX Sports.

University of Texas’ and Ohio State’s deals with Nike have since topped Michigan deal.

4. Hackett Graduated From and Played Football at University of Michigan

Hackett played football for the University of Michigan as a center in 1975. Former Michigan Assistant Coach Jerry Hanlon said the following about Hackett as a football player:

“He would do anything to help the team. We played him at guard and at center, and he wasn’t the greatest athlete in the world, but he gave you every bit of himself. I’ll tell you, he was tough. You don’t beat your head against a wall(blocking) every day at practice and in games and not be a tough kid.”

Hackett received his bachelor’s degree from the University of Michigan in 1997. He and his family live in Grand Rapids, MI, according to Hackett’s bio page.

5. Hackett and His Wife Kathy Have Donated Money to the University of Michigan 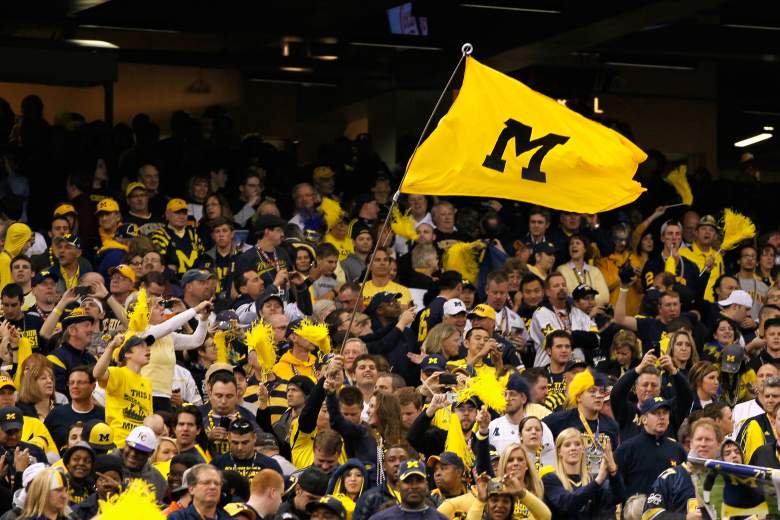 Hackett and his wife Kathy have supported Ford School students through two sustaining endowments – the Lee C. Bollinger Award for second-year students and the James and Kathy Hackett Family Fellowship fund. The Ford School is a leading public policy school at the University of Michigan.

The Hackett’s donated $150,000 for the Lee C. Bollinger Award which will endow an annual award for tuition to an exceptional second year masters student.

Hackett donated half of his Athletic Director salary to Michigan’s Athletes Connected program. Athletes Connected is a wellness initiative that’s designed to support the mental health of student-athletes. Hackett’s salary as athletic director was $600,000, according to The Detroit News.

Hackett also arranged to outfit Ford School’s building, Joan and Sanford Weill Hall, with desks, chairs, filing cabinets, and lamps while he was with Steelcase, according to Ford School’s website. 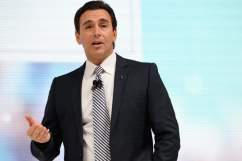