Judge Hawkins of the 9th Circuit: Has Trump ever disavowed calls for a Muslim ban? https://t.co/IEWoWZMDsm https://t.co/bK1xk6iK2F

Judge Michael Hawkins, of the 9th Circuit Court of Appeals, demanded to know from a government lawyer whether President Donald Trump has ever “disavowed” his campaign statements advocating a “Muslim ban.”

“Has the president ever disavowed his campaign statements?” the judge asked. “Has he ever stood up and said, I said before I want them to ban all members of the Islamic faith from entering the United States of America. I was wrong. I’ve consulted with lawyers. I’m not addressing it simply to security. Has he ever said anything approaching that?”

The 9th Circuit was hearing arguments on the constitutionality of Trump’s travel ban. The lawyer representing the government, Jeffrey Wall, told Hawkins that Trump has “clarified” his comments since the campaign. You can watch the exchange above.

“Yes, he has said several things approaching that,” said Wall, adding that the clarifications could be found in court briefs. “…over time, the president clarified that what he was talking about were Islamic terrorist groups and the countries that shelter or sponsor them. And over time, he and his advisers clarified that what he was focused on were groups like ISIS and Al-Qaeda.”

Protests erupted in the past over Trump’s travel ban. (Getty)

Judge Hawkins said, “His surrogates had said the president is just carrying out his campaign promises on this issue.”

“During the campaign, he clarified that what he was talking about were territories and countries that Congress and the previous administration had said were dangerous,” responded Wall.

The exchange came on May 15 during oral arguments before the 9th Circuit panel about the constitutionality of Trump’s revised travel ban. The court is hearing an appeal of a decision by Hawaii U.S. District Court Judge Derrick Watson.

According to Ballotpedia, Hawkins “joined the court in 1994 after being nominated by President Bill Clinton. He assumed senior status on February 12, 2010.”

Hawkins was born in Winslow, Arizona, and received his law degree from the University of Virginia. He also served as a special court martial military judge from 1970 until 1973, according to Ballotpedia. He was also a U.S. attorney, a special prosecutor for the Navajo Nation, and a lawyer in private practice, Ballotpedia reports. 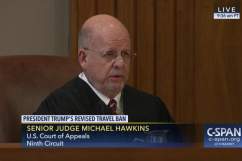