Pray for us, majority part of Arkansas under Flash Flood warning Again pic.twitter.com/NdqVlbFECD

The heavy rains and river floods that have plagued parts of Missouri, Arkansas and Illinois since last weekend grew worse on May 3, after floodwaters breached a levee in Pocahontas, Arkansas. The flooding is not limited to official FEMA flood zones.

Video from @Region8News shows homes in Pocahontas outside of FEMA Flood zones are inundated. Sadly, unlikely to be insured for flood. pic.twitter.com/N1xg36fzkY

Randolph County has opened a shelter for Pocahontas residents displaced by the flood, but evacuees seeking shelter might be required to show identification proving they live within the flood zone.

Meanwhile, authorities in the town of West Alton, Missouri (about 20 miles north of St. Louis) urged residents to evacuate for fear that another levee along the Missouri River is in imminent danger of failure.

Floodwaters forced Missouri transportation officials to close a large stretch of Interstate 55 and other major routes on May 3; as Weather.com notes, these road closures have effectively cut off the city of St. Louis from all points southeast of it.

This is a comparison of the #Flood2017 to #Flood1993 in St. Louis, and the flood level at the arch looks almost identical now. @stltoday pic.twitter.com/5DKqroT7kc

The floods in St. Louis are already being compared to the notorious Mississippi River floods of 1993, which at the time was considered the sort of flood likely to happen only once every 500 years.

St. Louis County has established a “flood relief fund” offering zero-interest loans for local businesses to repair flood damage. However, these loans are only available to “commercial enterprises,” not individual residents.

On the morning of May 3, several hours before the closure of Interstate 55, the Missouri State Highway Patrol tweeted a warning that floodwaters will likely force additional road closures, and urged any travelers in the area to check the state’s online road map to look for possible road closures.

On May 2, the highway patrol had to rescue several travelers who drove their cars onto flooded roads. Standard advice for any road-flooding situation is: do not drive onto flooded roads, even if the waters appear shallow and especially if the water is opaque enough that the road itself cannot be seen.

The flooding is bad enough for large portions of Arkansas and Missouri to be under an official state of emergency.

A State of Emergency is in effect for Missouri & Arkansas as flooding continues. Flood concerns in the Northeast too https://t.co/AaINvDXk6H pic.twitter.com/JX4GDJU9O1

In Arkansas, the National Guard had to be called out to help flood victims in the state. 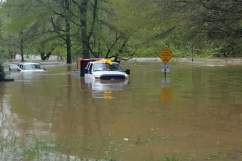 Read More
Breaking News
wpDiscuz
1
0
Would love your thoughts, please comment.x
()
x
| Reply
The already bad floods that devastated parts of Arkansas and Missouri last weekend were made worse by levee breaches forcing mass evacuations and Interstate closures. St. Louis is effectively cut off from points southeast of it.