May 1, 2017 is Loyalty Day in the United States. At a 2020 campaign rally in Harrisburg, Pennsylvania on Saturday, President Donald Trump reminded his fans of the holiday. What is Loyalty Day?

May 1 is already a number of holidays. It is also synonymous with Beltane and International Workers’ Day, or Labour Day. Beltane occurs between the spring equinox and the summer solstice. It had largely died out by the mid-1900s, but Celtic neopagans and Wiccans revived it as a religious holiday to celebrate summer.

The date also became associated with the labor movement in the late 1800s after violent protests at Haymarket Square in Chicago. Workers around the world now celebrate the holiday with marches and protests. However, Labor Day in the United States is the first Monday in September.

Learn more about the history and origins of Loyalty Day below.

2. It Became an International Holiday

A group of men representing the International Longshoremen’s Association declare their love for America on a Loyalty Day Parade in New York. (Peter Keegan/Keystone/Getty Images)

4. ‘American Labor Day’ Is in September

Unlike the majority of the world which celebrates workers on May 1, the United States and Canada celebrate Labor Day on the first Monday of September. Britannica writes:

Beltane is the anglicised name for the Gaelic festival that celebrates May Day. The Irish name of the festival is Lá Bealtaine, the Scottish name is Là Bealltainn, and the Manx Gaelic name, spoken on the Island of Man, is Laa Boaltinn/Boaldyn.

Originally, Beltane marked the beginning of the pastoral season, when livestock were driven out to the summer pastures. In modern times, less agrarian observers usually participate in another mainstay of the Beltane tradition: bonfires. According to BBC, the modern Beltane Fire Festival started in 1988. They write, “During the bonfire, the Green Man is killed as god of winter and reborn as spring to consort with the May Queen.” Other groups that hold such festivals include the above pictured Glastonbury Dragons May Fayre festival.

During these festivals, the May Queen represents the personification of summer. The Green Man is a vegetative deity commonly interpreted as a symbol of rebirth.

Many ancient religions had myths and legends about the death and rebirth of gods and goddesses. Celebrations of these gods usually occurred in the springtime, such as Easter.

Other Beltane traditions that made it into the modern May Day include dancing around the maypole and the handing out of May baskets. While not as popular as they used to be, May baskets were typically hung by children on their friends’ doors the night before May Day, according to Old Fashioned Living. 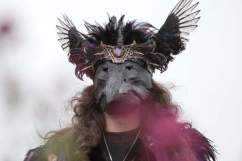 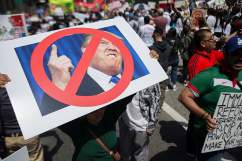 Why Is Labor Day in September in the United States & Canada?

Read More
5 Fast Facts, Donald Trump, Holidays
May 1, 2017 is Loyalty Day in the United States. At a 2020 campaign rally in Harrisburg, Pennsylvania on Saturday, President Donald Trump reminded his fans of the holiday. What is Loyalty Day?